A Bad Cup of Coffee

I like coffee. A lot. Whenever I make myself a cup of coffee, it has two tablespoons of half and half, two tablespoons of milk, and two little scoops of stevia. I have no idea what the actual meaurement of the scoop that comes in my stevia container is, I just now that this combination makes my coffee perfect. When it's done perking, I mix this concoction in a glass measuring cup and heat it in the mircrowave for 30 seconds. Yes, I heat fresh brewed coffee because I like it a little on the hotter side so I don't gulp it down. You should see some of the looks I get from baristas when I ask for my latte to be heated as high as they can legally serve it.

This morning after my workout I made myself a cup of coffee the same way I always do. I took that first sip expecting it to taste the same way it always does. It did not. It was not good. At all. To say I was perplexed would be an understatement. I thought I was noticing a hint of mint and mocha but I had no idea why because I knew for certain that I did not use my husband's flavored creamer.

I opened the fridge and realized my mistake. My better half had mixed a small bit of his flavored creamer in the nearly empty half and half container to take to work and left it at home. When I grabbed the half and half to put it in my coffee, it wasn't pure half and half. It was tainted with peppermint mocha creamer. Combined with the stevia, I felt like I had just eaten a spoonful of sugar.

When you are familiar with something you notice when something is clearly off. You might not be able to determine what is awry immediately, but you know, deep in the center of your being that what you've just experienced isn't right.

While this is a pretty benign example of something being rotten in the state of Denmark, if we aren't immersing ourselves in the truth of God's word, how can we ever know if what we are accepting as truth actually is truth?

J.D. Greear writes, "Satan's primary temptation strategy is to try and make us forget what God has said about us and to evaluate our standing before God by some other criteria." Think about it. His temptation towards Eve starts with, "Did God really say?" If he came at you with, "Did God really say that anything you ask for in my name will be given to you?" and you are not familiar with the context of the statement or the whole of Scripture, what better way to plant a seed of doubt that God doesn't stay true to his word. But let's take it a step further. If Satan came at you with, "God said that if you love him you would obey his commands; and since you aren't doing that, clearly you don't really love him," how would you respond? With shame? Guilt? Self-condemnation?

My greatest fear is that we will become so dependent upon others to teach us that we'll forget the truth that God wants to teach us himself through the words he gave us.  It doesn't mean we can't and shouldn't learn from others at all, it just means that if anyone other than the Father, the Son, and the Holy Spirit are our primary sources of information about God, we are missing out on the deeply personal relationship he's intended for us to have since the beginning. But don't take my word for it, open your Bible and find out for yourself. 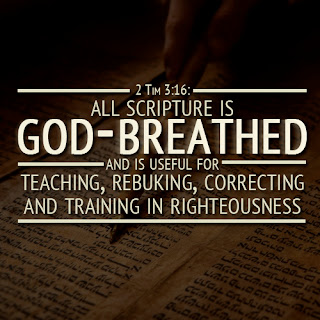