"All fear is but the notion that God's love ends." Ann Voskamp

In 2 Corinthians 11:3 Paul writes, "But I am afraid that just as Eve was deceived by the serpent's cunning, your minds may somehow be led astray from your sincere and pure devotion to Christ." Nothing can lead us farther from God than fear because fear is what drives our attempt to gain control instead of seeking the one who is in control. Our quest for control is most often rooted in the belief that God is not going to take care of us. Why? Because we believe we can outlive the amount of love God has for us, or at the very least, outlive the amount of grace He can give us, based on our sad performance record. Or maybe that's just me.

But is that true, or even a remote possibility? Can we outlive His love or grace towards us? Scripturally speaking, we have to know that the answer is no.

The Israelites still made it into the Promised Land even if their entry was delayed, David was still king despite an affair and premeditated murder, Peter was still chosen despite denying Christ, and Paul was still chosen to preach the Gospel even though he saw to the killing of Jewish Christians before he accepted Jesus as the Messiah. Now I know we aren't supposed to compare our sins, but surely if God's love did not run out on them, why do we even entertain the thought that it will run out on us?

When Paul wrote that he was the worst sinner, we are never told why he labeled himself as such. And having lived in a time where material possessions aren't what they are today, we can assume it wasn't because he insisted on flooding his facebook timeline with accomplishments, acquisitions, or accolades. What's interesting is that he labeled himself this way AFTER he came to know the risen Lord, not before. Before he was pretty sure of himself and his credentials. After? Not so much.

One thing I have learned is that when we confess what is weighing on our hearts and minds and put it out there in the open, once it's exposed to light, it looses a significant amount of its power because it can't lurk in the shadows or threaten us with false consequences. And if Paul is warning us that he fears our minds will be led astray like Eve's, we almost have to wonder if verbalizing what temptations we face that would threaten our sincere and pure devotion are held up in contrast to Christ, if we would realize that the trade off isn't really worth it compared to His surpassing beauty.

What I see is that if we are honest in our prayers and can admit where our fickle hearts truly stand, somehow through the honesty, God seems to flood us with the peace that He already knows and is working on it. After all, He gets it better than we do because He made it in the first place. And our cardiac malfunction is always covered under the original manufacturer's warranty. We didn't need to purchase the extended version and there are no limits on repairs.

The fact is our flesh is weak and we easily believe the worst about ourselves. So perhaps instead of repeating Satan's faulty messages, we can open God's Word and repeat back to ourselves the things He says about us. Maybe then we'll finally overcome our unbelief and accept that the proof of His love on the cross is all that we need to accept that His love will never fail. 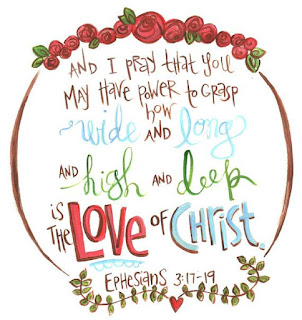