When You Need It Most

Case Scenario 1: You have just shown up unannounced at your best friend's house to surprise her with coffee and doughnuts, to sit down and catch up. She appears to be less than thrilled that you are there, she reluctantly lets you in while looking at the clock frequently, and then her phone rings. She excuses herself from the room and comes back minutes later with puffy eyes and asks you through a whisper to leave. You wrap your arms around her, sqeeze gently, and let yourself out.

Case Scenario 2: You have dinner on the stove cooking when the phone rings. Someone is stuck at work for another hour because the entire computer system just failed. When the door opens two hours later, you are ready with open arms, start to reheat dinner, sit down in the chair across the table, and just wait patiently for the conversation to begin.

Case Scenario 3: Your son who was fingerpainting at the table has mysteriously disappeared without you noticing. You have no idea how long he's been gone. Suddenly, you hear a delightful squeal from three rooms away. As you make your way down the hall, you see original artwork on the carpet, the walls, the cat, the doorway, and a second tiny human. And you, in a moment of extreme humanity after a sleepless night because of an awful cold, say something rather loudly and firmly only to see the furry creature scamper into a closet and two tiny humans well up with tears. You immediately excuse yourself to the bathroom and berate yourself for being an unfit mother.

So here's my question. Why can we extend others grace in their most desperate moments of need and refuse the same thing to ourselves? Why do we have expectations that we must live up to that we would never hold another human being accountable to? And why, if we would immediately jump to the defense of a loved one being verbally attacked, do we verbally attack ourselves, often without cause or provocation, when the slightest thing goes wrong?

As I just sat here typing this, for some reason I lost my internet connection. So realizing I would likely lose everything I had typed so far, I copied and pasted it into a document, shut down the laptop, and rebooted the system. As I suspected it would be, my draft was gone when I got back to blogger. But as I reinserted my words into a new post, the first verse that came to mind was that as far as the east is from the west, so far has he removed our transgressions from us. (Psalm 103:12) And as I began typing what happened to share with you, the second verse that came to mind was that if anyone is in Christ, the new creation has come. (2 Corinthians 5:17)

Ya know, most of us as believers don't set out on a daily course to ruin our testimony. We don't seek opportunities to make Jesus look bad despite our profession of faith. And the moment we acknowledge that we have fallen short of his glory, whether it was because we were caught off guard, tired, overwhelmed, or any other trap that our feet stumbled into, he is faithful to forgive. We don't need to condemn ourselves for what he has covered with his blood and removed to make us spotless. And any time we are victim to our weaknesses, we have the chance to offer thanksgiving in remembering that we will never be our old selves again, because once Christ has made us new, we continually get system upgrades and our operating systems don't stop accepting the new downloads.

God's grace is meant to be lavishly shared with everyone, including, and especially, ourselves. So if you've had a bad day, if you lost your temper and still need to apologize, if you snapped and didn't mean to, if you didn't say please and thank-you because manners went right out the door, realize that regardless of what you did or didn't do, God loves you beyond measure and nothing is ever going to change that. 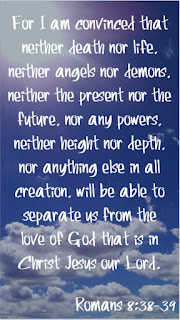