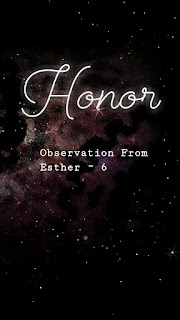 On Friday Haman had just been advised to have Mordecai hanged on the gallows before his second dinner with the King and Queen. We pick up today in Esther Chapter 6.

Due to a case of divine insomnia, Xeres is reminded of the plot that Mordecai uncovered regarding the plot against him by the two eunuchs. He asks the question What honor and special recognition have been given to Mordecai for this act? He finds out nothing and then asks who is in the courts.

We know that Haman has arrived seeking permission to hang the man the king just realized he never repaid. And before Haman gets a chance to ask his question, Xeres hits him with one that strokes his ego just the right way. What should be done for the man the king wants to honor? Unfortunately for him, the king is not talking about him, but his enemy.

At this point, Haman answers based on what he would want to be done for himself. And then, he finds out he has to do his exact suggestion, down to the last detail, for Mordecai. And so he does. It almost makes you wonder how enthusiastic he was or if he was choking on the words coming out of his mouth, and if secretly he wanted to put himself on the gallows he'd just built.

I don't know about you, but I do not like to be the center of attention. As a matter of fact, I would rather be against the wall in a crowd or in the kitchen at someone's house while everyone else is congregated someplace else. And so if someone were to have any desire to honor me, the last thing I would want is to be paraded around with someone shouting how good I am. I wouldn't even want a small gathering in public or private. If truly necessary, I'd take words of encouragement that came in a card over anything else. But not Haman. He wants pomp and circumstance.

Ego is such a funny thing. Whether we think too little or too much of ourselves, either is a problem. One we discredit God for creating us the way He did, the other we inflate our value beyond recognition. And trying to find the subtle line between humility, false humility, and arrogance is tight sometimes.

What we can be sure of is that the moment we esteem ourselves above someone else, anyone else, we've crossed over it with a mother may I take a giant leap kind of step.

This is a tough pill to swallow. Why? Because there are people we know privately or through the lens of the public eye that we think are getting things they either don't deserve or aren't getting the things we think they do. I know. Ouch. It hurts. And believe me, my own toes are really bruised from that one.

Ironically, we have the solution. It's found in Hebrews 12:1-2 And let us run with perseverance the race marked out for us, fixing our eyes on Jesus, the pioneer, and perfecter of faith.

Because here's the thing, if we are running our own race, and we are keeping our eyes on Jesus, we don't know what's going on that might tempt us to pass judgment. Easy to say, hard to do. Because we aren't blind and we have to function aware of the state of the world.

So what do we do? Follow Jesus. We follow Him when He says do unto others, love your neighbor, and pray for your enemies. Why? Because whether we like to admit it or not, we were once considered enemies of God ourselves and He came to intervene for us.

The book of Esther is not just a story about a girl who was in the right place at the right time. It is in the most profound ways a study of human nature and character. It is a charge to remind us that while we have some things that are noble in us, we also have flesh and a human nature that can show more of the world that we want to admit remains.

Painful, yes. But not hopeless. Never, ever hopeless. Especially when we can own it, repent of it, and move towards going and sinning no more.

1. If someone were to honor us for something you did, what would we want?

2. If someone we considered unworthy were to get that same honor, would it cheapen it or lessen the desire for us?

3. What do we think makes someone worthy or unworthy of honor?

4. Do we realize that all we've been given from God through the blood of Jesus is not something we could have ever earned or deserved?

5. How can we pray for ourselves that our hearts would be made right towards those we deem as less than worthy?