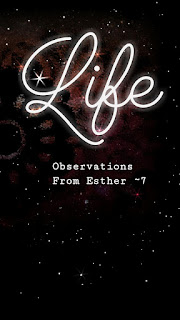 Yesterday we ended with Haman being rushed off to the second banquet with the King and Queen. We pick up in Esther Chapter 7.

Arriving at the banquet, Xeres asks Esther what it is she wants and again promises up to half the kingdom. She finally responds asking for her life and the life of her people to be spared. Subsequently, Haman is revealed as the perpetrator and punished severely for his plot.

While this chapter is concise and to the point, Esther says something I think reveals a gap in how we see God. Or at least how I see Him.

In the second part of verse 4 Esther starts with, If we had merely been sold as male and female slaves, I would have kept quiet.

Why? Why is that something better? Why would that not be worth bringing to the attention of the only earthly one who could change the circumstance?

Those questions led me to some tough questions about my prayer life and the way I view God. And while I haven't completely worked through them all, I can say that I have learned one precious lesson.

When I wrote my prayers in my prayer journal in late May/early June, I kept adding to them. One of the things I added was a little blurb of truth that I remind myself of every day.


Don't focus on how it will all work out. Just believe that there is a God in
heaven who loves you wants the best for you and died only to live
again so that you would know NOTHING is impossible for Him.

Why do I share that? Because there are lots of possibilities that are significantly less than worst-case scenarios that I have a tendency to grip with everything I have rather than giving them to God. But if I genuinely believe what I say I believe, then His best for me has to include a life lived not defined by stress, worry, and anxiety over the things that are less than but still have an effect on me.

We spend so much time telling ourselves that things aren't that bad that we are self-medicating with platitudes that aren't doing anything for the health of our mind, soul, or heart. We are hearting and pretending at the same time because we don't want to be seen as needy, high-maintenance, or incapable.

Now, I am not talking about moving to the point of whining and complaining, I am merely saying we need to be honest about where we are. And sometimes that means calling something like it is. Unfair, unwelcomed, and uninvited. It's not wallowing in self-pity; it's saying God, I don't like this and I want you to change it, or at the very least, give me a different perspective on it because I am not grateful right now for what You know that I don't.

And here's the thing. He is very well aware of when we are faking it, attempting to control it, or self-medicating instead of dealing with it. And I am reasonably sure He would much rather we come to Him with it.

1. Do we tend to approach God only with extremes and if it's not that bad to accept it and move on?

2. What does that say about how we think He sees us?

3. If we were to be really honest with God about the things in our lives that we don't like, what would they be and what would we ask Him to do?
at October 09, 2018