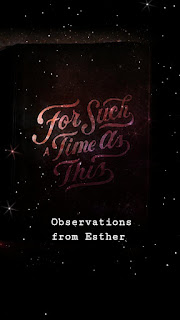 It feels like it's been forever since I last posted. Reality says 116 days. I say a lifetime. I don't think I realized how desperately I needed a break until I actually took one. I mean I love doing this. But the pressure I was putting on myself was pretty unhealthy and I felt like I was slipping. Half the time it seemed to me that I was scrambling to put two thoughts together and then attempting to put a bunch of other words around it so that it at least looked like a decent post. Hopefully, the things that I've learned and reflected on during my hiatus will show up here.

I've mentioned before that I have been doing the She Works His Way Bible reading plan for 2018. Yesterday was the last day in the Old Testament. Let me just say, if you have not done a chronological reading of the Bible, I really believe you should. To see the story unfold with all the ups and downs, good and bad choices, deliverances and captivities are astonishing. It's also pretty sobering when you realize how much of your own life ebbs and flows the same way with your faithfulness and commitment to God and His ways.

But for now, as I return, I want to spend the next 10 days in Esther. One chapter a day. It's not an overwhelming book, it's one most of us are probably pretty familiar with, and it feels right to share the things I have seen. I've seen so much of myself in these people; yes, even Haman.

If you don't have your Bible handy, here is a link for Esther Chapter 1. I'm pretty sure once you are there, you can just change the translation if you would prefer something other than the NIV.

The things I noticed aren't novel. Xeres was feeling good on wine, wanted to show off his wife, and she refused to meet his wishes. We don't know her motive in saying no. She could have been sick of his drunken exploits or she could have been half asleep. Maybe she was feeling bloated from too much food and felt like she was going to be sick. Whatever the reason, it caused a problem, and as a result, anger burned in Xeres.

When I read that, I sat back and wondered how much the choices of others cause anger to burn in me. All it takes is a quick scroll of Facebook these days for me to tell my husband I shouldn't be on there because I start all kinds of judging. I'm not proud of this fact, I'm just being honest. But it also makes me wonder why I give others that kind of control over my emotions in response to their actions. I have no ability to dictate their choices, nor do I want that kind of power or responsibility. But it doesn't stop it from happening. And I really have to wonder why.

In our sermon series at church, I started to get a glimpse of the answer to that question. I don't like it when others make choices that end up having a negative effect on their life which ultimately impacts mine. I want a peaceful existence, and when that is threatened, I react. I didn't even realize how strong my self-preservation instincts were until this sermon series started. And all I can say is that I must have some serious trust issues going on that I have not previously been aware.

However, something is intriguing to note in this chapter. Xeres asks what should be done about Vashti's refusal according to the law. Hello? Does the one in charge of it all not know what the rules are? That seems a bit disturbing to me. And if that's the case, what does this say about his leadership in his own home? Did he communicate his expectations of her when they married? Granted this may be a very first worldview, but if she was the queen, I would imagine she should have been given some idea of what her duties were, at the very least in the area of hospitality.

But what's so striking, is that apparently, she was a woman of influence. There was a concern on the part of Xeres' officials that if word got out about her actions, it would cause an uproar in more than just the palace. That says something. As a result, she is removed from her royal position with the issuing of a decree suggested by the king's officials.

As I read this familiar passage, I was forced to ask myself some tough questions. My prayer is that you will look at them and answer them as well. They aren't pleasant, but they are meant to help us grow in Christlikeness. And if that's the ultimate goal, the hard questions are the ones where we need to focus our attention.

You don't need to share the answers, and I'd welcome your comments on whether or not you find these questions helpful. I just know that as I got really honest with myself I became more and more aware of my need for repentance, God's grace, and His redemption. I know I'll never get this all done correctly, but I also know that with Christ's strength in me, I can overcome and do better.

1. When have my motives for doing something been far from pure? Why?

2. When have I let burning anger get the best of me?

3. What should I be aware of to lead well? What steps do I need to take to do better?

4. When have I acted in haste rather than humility to save my own reputation?

5. Do I realize the influence I have on others who are watching me, believers and non-believers alike, and do I take that responsibility seriously with my words, actions, and thoughts?

Photo: Instagram filter with title page found in the She Reads Truth Bible.