The last words the angel said to Mary before he left were, "For no word from God will ever fail." I can't help but wonder if Mary had heard Joshua 21:45 echoing in her mind as those words were spoken: "Not one of all the Lord's good promises to Israel failed;  every one was fulfilled." And I can't help but think that at some point, she started asking a lot of questions.

There is a joke among mom's about the abilities of the CIA and FBI. Nothing that shed's a negative light on their duties or job descriptions, but that if it were run by mom's.....and I do mean just average every day mom's.....we could totally handle the job. Why? Because hands down, we can do the most excellent research on any 'thing' or any 'one' that we feel might pose even the slightest threat to our children.

Granted Mary did not have access to google search engines while she was pregnant. But there is a part of me that wonders once she agreed if she started asking questions about everything that was prophesied about the Messiah once she had consented to God's request. And while I am reasonably certain she never regretted her decision, there is a part of me that absolutely believes she had moments of doubt and possibly even moment she hoped a first time was approaching.

I can not imagine the anguish she felt upon discovering the words of Isaiah, "But He was pierced for our transgressions, He was crushed for our iniquities; the punishment that brought us peace was on Him, and by His wounds we are healed." As a (slightly) recovering helicopter mom, the thought of knowing something painful or frightening is in the future of my children terrifies me. I know I can not protect them from every wound, every harsh word, and every disappointment. But just think what that would have been like for Mary once she fully grasped what was in her child's future.

Did she begin to realize what it all meant when He was in the temple teaching at twelve? Was she hopeful when He reached twenty-one and nothing ground shattering had happened yet? When the first miracle was performed did she get a bit nervous? And what was her response when she heard the chatter and rumors of the religious leaders determination to stop Him?

There is nothing, absolutely nothing, that can prepare a mother's heart for the pain her child will endure, whether it is experienced through choices of their own or the consequences of actions of those around them. And I can only surmise that she might have had a verbal tirade at one point in time or another that Jesus stepped in and calmed her fears much like He calmed Peter down after he drew his sword to defend Jesus from those coming to arrest Him. Did He look in her eyes? Did the tone of His voice soothe the weariness in her soul at the thought of His pain? Did He just simply say, "I promise that even though you don't understand, I know what I am doing and it is for your benefit and the benefit of all."

None of these questions are answered for us in Scripture. But in the wonder of the miracle that happened all those years ago, it's difficult not to speculate from a mom's perspective what this might have felt like for her.

We will never be able to wrap our mind around what Mary endured during her pregnancy, those first days with a newborn, or what it was like when Jesus finally passed her in height. But we can take courage from the road she has walked ahead of us and intentionally invest ourselves in the opportunities God puts in our lives that call us to sacrifice pieces of our heart for the sake of others, whether we have given birth to them or not.

As Christmas approaches at what seems like the speed of light, let's not forget that those last words spoken to Mary, while at one point must have felt like the weight of the world, lifted that same weight off her shoulders and on to Jesus. And let's wait in joyful anticipation to arrive at Christmas morning knowing that He came to fulfill all the promises that have been spoken to us as well. 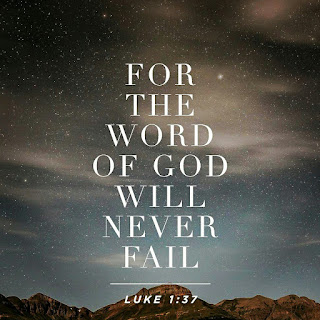