If we were told by a friend that they had driven by the most astounding display of Christmas lights in a nearby neigborhood, would we go to see it?

If we were told by a co-worker that they had been in a store that had a display of a manger scene that took their breath away, would we take the detour to behold it?

And if we were told by a neighbor about a song they'd heard sung at church that overwhelmed them with the truth of Jesus, would we search itunes to listen to it?

On the night of Jesus' birth, the shepherds were out among their flocks and of all things, an angel appears to them and says: "Do not be afraid. I bring you good news that will cause great joy for all the people. Today in the town of David a Savior has been born to you; He is the Messiah, the Lord. This will be a sign to you: You will find a baby wrapped in cloths and lying in a manger."

Unlike us with busy, over-committed schedules hoping someone will post a picture or link on facebook, instagram, or twitter, they decided to go and see what they had been told about. It would have been easy to just assume the information they had been given was true because well, an angel appeared and told them and shortly after a company of heavenly host appeared and broke into song. But still they chose to leave their current location to find what they were told they would. And find Him they did.

This deposit of faith was returned with interest and caused them to return glorifying and praising God for all the things they had heard and seen, which were just as they had been told. And I can't help but wonder how often we do this.

When God speaks to us through His Word and we then find what He says to be true, who are we telling? When God shows us something about Himself through the ordinary things of our days, who are we encouraging with our experience? And when God opens our eyes, removing the veil over what has blinded us, how many people are we showing our freedom to?

These shepherds could have easily taken the angels words as truth and stayed put but they didn't. Something compelled them to seek it out and see it for themselves. But once they did, they didn't keep it to themselves. They couldn't because it was too much to hold inside.

I am not saying we should drive around with a bullhorn in hand shouting out our car windows while stuck in traffic or that we should position ourselves in the center of the busiest shopping centers in our towns unless God would truly compel us to do so. But I am saying we need to start talking about what God has done, what He has showed us, and what His love has done in our lives. Jesus isn't meant to be like the best kept secret ingredient of grandma's homemade chocolate chip cookies that's a guarded family secret. He's meant to be known, deeply and personally by us, and then shared with everyone we know. 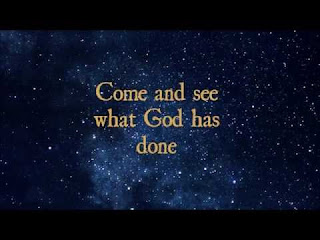