Do not have two differing weights in your bag - one heavy, one light. Do not have two
different measures in your house - one large, one small. You must have accurate and
honest weigths and measures, so that you may live long in the land the Lord your God
is giving you. Deuteronomy 25:13-15

It is so often tempting to breeze by a verse like this and think it has no relevance today. I know of no one who carries weights around in their bag and I have never been in a position where I needed to measure something out that I would have used the wrong amount purposefully. I mean if someone needs to borrow a cup of sugar, I'm going to give them a cup of sugar.

But.....is that the same way I measure out what really matters? The things like love, grace, forgiveness, mercy, compassion? Or do I do the exact opposite of what Moses prescribed when he said to show no partiality? Am I more willing to give grace to one over another or let an offense go based on who the offender was?

It's sometimes a little too easy to look around and think that God really does play favorites. But the truth is, just like the parable Jesus told, if you are forgiven a debt, a debt has been forgiven. And if one is bigger than the other, it doesn't really matter because both have received the same grace. The fact that one was perhaps a little, or maybe a lot, larger doesn't matter. Same God. Same action. Same result. Debt free living.

And the same is true for the baby that came for you, me, and everyone else on this earth. Regradless of how great our sins or the sins of another may seem in comparison, He came for one and He came for all. No one more than another. He loves us all the same but uniquely and reaches out into our hearts equally. We are all given the same invitation to turn to Him.

As we are what seems like moments away from celebrating the birth of our Savior, let's think of all the ways He has shown His great love for us over the past year, and then worship Him in the way He both deserves and is worthy. I pray that His peace fills our hearts to overflowing as He pours out equally on each of us. 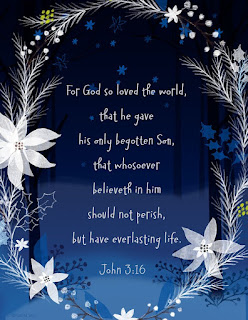 Take the time to unplug this weekend or catch up on posts
you might have missed since December 1. See you back here
on Tuesday, December 26.
at December 22, 2017