Last week I wrote about Curious Cats and the human logic that believes knowledge is power. While I stand by what I wrote, this morning I realized why it's such a faulty thought. At least for me. Knowledge alone doesn't really have the power to change anything. We could all list an array of facts about the state of the world that wouldn't make a hill of beans of difference in their reality. However, understanding, with a desire to move towards action, that's a whole new ball game right there.

This past weekend I heard a sermon at church that made a lot of sense. The premise was that we need to stop saying 'my thoughts and prayers are with you' which does little to practically help the person in their time of need, and then move to doing something that is beneficial. Whether it's bringing a meal, watching their kids, or lending someone our car. As you might have assumed, the sermon was based on James 2:14-17. And as I thought about the sermon more and more, there were a few things that kept swirling around in my head.

James asks the question Can faith without deeds save a person? And the answer is probably not. I'm sure most of us remember the old joke about the person in a flood where God sends a row boat, a motor boat, and a helicopter but the man drowns anyway. Upon entering heaven the man asks God why, if in faith he believed God would save him, that He didn't come through. God (I imagine with tilted head and a slightly exaggerated tone) responds with What did you think the row boat, motor boat, and helicopter were for? The man had the faith but without the action of getting in one of the boats or on the helicopter, he was going to drown.

Now, I learned at church that the verbal response of Go in peace; keep warm and well fed was a pagan sentiment. This was followed by the idea that we can't expect non-Christians to act like Christians. Now, this makes sense. Perfect sense. Because as Christians we know that we are to do for the least of these, do unto others, and love our neighbor as ourselves. So then the logical question comes, if we know this, why aren't we acting on it?

And the reality is, without understanding the reason behind our lack of effort or involvement, doing will never come naturally to most of us. There are some of us who are flat out doers. I've witnessed them in complete amazement. But for the rest of us who might tend to freeze, I think for a good bit of us, it's not necessarily an inability to come up with an idea (most likely generated by the Spirit of God whispering in our ear), it's fear that stops us.

If we are in a situation where our grocery bill is out of control, making someone else a meal is going to terrify us because we don't know that there will still be enough for our family. If someone desperately needs a night out and you want to watch their kids or bring them to your house we don't know how we will manage to do that because of the age difference between their kids and ours. And if someone's car just died and we want to lend them ours for a period of time, we don't know how we will manage without our second vehicle with all of our obligations.

That is what I beleive James means when he writes Faith without action is dead. Without action that shows we believe God will supply our needs as we meet the needs of others, that faith is pretty much on its last breath.

The scary part of this is that we have evidence surrounding us of all God is capable of doing. And yet we suffer from a scarcity mentality that there won't be enough. Enough food, enough resources, enough time, enough whatever. We function as if His resources are limited, our welcome can be worn out, and that we'll suffer consequences if we did something but weren't supposed to as if He's going to teach us a harsh lesson about listening to the Spirit with more accuracy.

Now, before we get all up in arms, I can write this because this is me. I live more of my life in fear than anything else. I am getting better, but it's not easy. In yoga terms, this is stretching me like down dog into cobra, up on my toes, and thighs off the floor. It is uncomfortable and hard.

The good news is God doesn't typically expect us to jump into the deep end of the pool. He is patient with us, even in areas of growing our faith and confidence in Him. He made us, He knows our history, He knows our baggage, and He knows why some things are hard. It's also why He pushes us out of our comfort zones, pokes holes in our faulty logic, and invites us into opportunities to trust Him so that we can take more opportunities, maybe even big and scary ones, in the future.

But in order for any of this to happen, we have to get real with God about understanding why we think the way we do. We have to be willing to go back in time and see where the disconnect of belief begins. Is it something that happened when we were kids? Is it an experience that we watched someone else go through? Or is it that we haven't seen the redemption we desperately sought over a choice we know God called us to make that we see as a colossal flop? I've said it before and I'll say it again, there is always a root.

I know this is a challenge. If you have school aged kids, I'd liken this to a 3-dot Challenge 24 card. But if we can open our hearts to God on this one, we just might see evidence of mountain moving faith in more places than we think possible. And who knows, maybe with a little more action, we might shed a few pounds from all the extra weight we've been carrying as we put down the baggage we've been lugging around far too long. 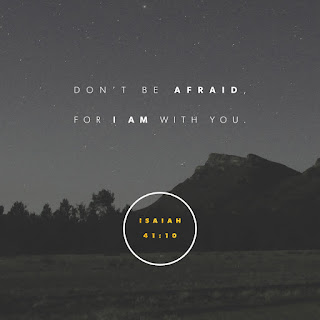