For some time I have been wearing Giving Keys. If you aren't familiar with them, you should be. They aren't something magical or mystical. I like to think of them as the modern tassels worn in the Old Testament.

Giving Keys have a single word on them. The three that I wear say: Breathe, Believe, and Fearless. Each key has a scriptural reference that is signficant to me in what I desperately want God to accomplish in my life and what I need to do in order to cooperate with any internal overhaul He might be leading me towards. Essentially they are reminders. Reminders to breathe (or as I call it perform Holy CPR) in truth and exhale disbelief when faced with a moment I think I might actually be separated from the love of God.

The idea is to wear the keys until you no longer need them and then give them away, hence the name Giving Keys. What's interesting is that I haven't felt compelled to relinquish any of my words yet because I know God is still at work and that He will tell me when the time comes.

What's exciting is that one of my words has taken on new life: fearless.

While I would prefer not to admit this, I tend to operate a lot out of fear. Things I do and don't do in order to ensure later outcomes. (Don't splurge on dessert for the family to make sure you have the extra money for 'x' ~ whatever 'x' might be.)

And while there is nothing wrong with sticking to a godly budget, when you say no to something because of fear, there's a lot wrong with that.

Much of this has to do with my upbringing. I still live in the Guilt Zone. The one that still says If you hadn't ............... then this wouldn't have happened. For the majority of my life, my reality could be listed in a series of proven hypotheticl statements. In refence to the ice cream scenario above.....if you hadn't splurged on dessert, you would have saved the extra money for this unexpected situation and now you are stuck because you didn't. No lie. This is what it is like to live inside my head.

Back to the point.

Fearless I have recently come to understand (praise God) is not necessarily about living a life of never being afraid of anything, but about fearing LESS. As in not every blessed moment of every single day.

Okay, that might be an exaggeration, but not by much.

Now, if there were a simple solution to this, like say swallowing a pill, the whole problem could go away. Except pills like that don't really exist. However, I learned something on my wedding day. Just like I gripped my dad's hand as hard as I could and made his knuckles turn white, I can do the same with God. Now, I can't squeeze His hand so hard as to cause Him pain, and frankly, I think He might like me holding on for dear life rather than telling myself He's not trustworthy. But that's just a hunch.

There are hard, scary things we will face in this world. An unexpected diagnosis, an unanticipated loss, and tragedies that should never, ever happen. And when those things pop up, we will feel fear. It's natural to respond to the things that throw us off our game. But we can take them straight to God, hold His hands, and ask Him to help us fear......less. Because if we do that, and just grip onto Him with everything we've got, we'll soon see our tight grip loosening as our hands get tired and see that He's still not letting go. 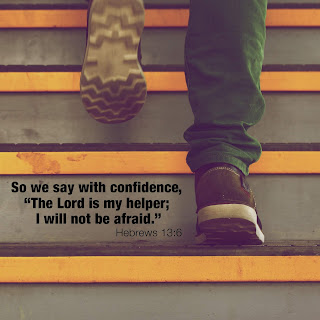