Last week I mentioned the idea that instead of living fearless, that perhaps we are supposed to live and fear, less. This was mentioned at Bible study on Friday and at the time I was reminded by our leader of something that had been said previously, basically recognizing what's going on and then getting back on track faster. It made me think of a boomerang.

When we think about that strange object that somehow through physics is thrown and then returns to the sender, we typically picture someone that looks like Crocodile Dundee in the Australian outback. But what if we gave it a more godly appearance and looked at it through a spiritual lense and apply it to what we go through when it comes to fear.

The best acronym I have ever heard for fear is False Evidence Appearing Real. And if anyone is out to strike fear in our hearts it's the enemy. His goal is to convince us beyond a shadow of a doubt that we have been separated from God's love, which is, by the way, the root of all fear.

Now, if we are IN Christ we know that nothing can separate us from His love. However, the enemy will do whatever he can to make us believe otherwise, including throwing us for a loop. But if we were to consider ourselves a boomerang, believing fully that we are God's dearly and beloved children, we know we will return to Him. It won't stop the enemy from trying, but eventually, no matter how hard or far he manages to toss us, we are never out of God's reach and something in us, like the mechanics of a returning boomerang, will draw us back.

The thing with fear is that on this earth something will always happen that manages to take us by surprise. But what if we could remember in those moments that we've just become a boomerang, tossed by the enemy who had no right to pick us up in the first place, and immediately started returning to the place we aren't meant to leave, the shelter of God's wings?

Fear, when it comes to fear of the LORD, has a place. But that kind of fear is vastly different than the one the enemy is trying to make a part of our DNA. And while our natural instinct is likely always going to be to respond in fear when something unexpected happens, the moment we recognize it and name it as such, the faster we'll return to safety.

I don't know about you, but I am pretty tired of always being afraid of the unknown. Because the truth is, even what is unknown to me, is clear as day God. And as long as He's in charge, I think it's safe to say we can start to fear less. So instead of having our fear be a returning boomerang, let's let it be the kind that God casts out with His perfect love, as many times as is necessary, and then let's avoid picking it back up by sticking close to Him. 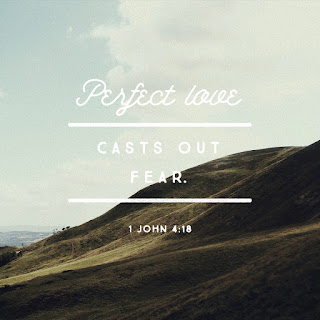