Confession: I have never seen Jerry Maguire. Honestly I don't think I ever will. I'm not a fan of Tom Cruise and truthfully never have been. As a matter of fact, in the spirit of full disclosure, I don't even know that I've ever seen all of Top Gun. (And all the women close to my age just audibly gasped with their hand over their mouth.) I know, odd one out over here.

But despite never seeing the movie, I do know the famous lines......One by Renee Zellweger (You had me at hello) and the other by Tom Cruise (You complete me).

While there is no scientific study related to this comment, I would guess that one line by Tom Cruise has done more harm than good. As a woman, I can honestly say that I would love for my husband to say that I complete him. To feel completely and totally irreplaceable as if he would up and die without me, that the world would stop turning, and that his life would cease to have meaning if I were not in it. Ego? No, I don't think so. A desperate desire to feel valuable, treasured, and needed, no doubt.

But as romantic as that notion might be, it's not only unrealistic, it's incredibly unhealthy. When we find our value and worth in anyone else that is just as human and flawed as we are, we are setting ourselves up for loads of disappointment and heartache. We were not designed to carry that kind of pressure or manage that expectation.

This morning I started a new devotional by Michele Cushatt called I Am. She wrote something I want to share and encourage us with: When you and I look in the mirror and struggle to see evidence of a marvelous creation, it's simply because we're catching a glimpse of a work in progress. (p. 29)

If you are local, how many times do we walk into Giant Eagle and see a sign that says Pardon our mess while we remodel? Or for that matter any store? Why? Because they know that what we expect to see is different than what we are about to see. Improvements are being made whether it's to the flow of merchandise or the aesthetics of the store with fresh paint, flooring, or decor. Improvements that aren't quite finished yet. And heaven forbid you walk into one of the newly designed Targets unaware of some of the changes they've made. Goodness gracious, their cosmetic department now looks like that store in the mall or that other store that is usually close to a mall. And the teen section? Oy! The one I was recently in had music playing. Target NEVER has music playing.

The point is this. We can't accurately assess the position we are in at any given point because we are constantly a work in progress. We may see capital improvements along the way, but even those things will eventually become outdated and we end up in another major overhaul. It's the concept of pruning. And if I have learned anything, it's that pruning, while purposeful, is still painful. (You can use that. It preaches all by itself which is why I keep it on repeat in my head.) Not only is it an uncomfortable process, but sometimes it can be a real eye-sore to look at.

So what does that have to do with Jerry Maguire and being completed? We can't complete ourselves and no one we know can complete us either. The only one in charge of any rennovations is the one who created and designed us in the first place. We can resist or submit to the process, but we really have no control over it. But the good news is that the one who started it, will see it through to His perfect completion.

Wherever we find ourselves today, let's remember that nothing about our lives (our homes, our callings, our kids, marriages, or stuff) will ever be able to complete us. And if we are tempted to be unhappy with anything we see, maybe we need to put on a hard hat and slap up some yellow tape that says Construction Zone to remember that the work isn't done, but that when it is, it will be a thing of unmistakable beauty. 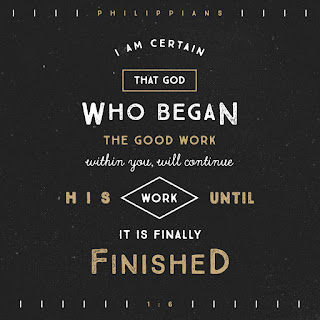