Yesterday was interesting. I can't describe it, but I think from reading No More Faking Fine something was unleashed in me that I forgot ever existed. I know it was there a long time ago, in one capacity or another, but yesterday it emerged in adult form. And honestly, I am still turning this over in my head.

And then, after it was over, I lamented! Seriously, that is what I did. My verse for the day (not coincidentally) in the Adoration plan for March was Psalm 46:1 God is our refuge and strength, a helper who is always found in times of trouble and my very first sentence in my prayer was: Lord, I am so angry right now I could scream at the top of my lungs!

So, I stood up for myself, took my frustration directly to God instead of excusing the behavior, hashed it out with God, and then prayed for myself to see the other person's concern in their words and to see them as God sees them, not my perspective. Seriously, you must try this. It was incredible.

What's really interesting though is what happened a little while later. I was rereading 2 Samuel 15-18 because those chapters illustrate the backstory of Psalm 3, a lament David wrote when his son Absalom had turned against him. Because a plan had been created to stop the takeover, David's friend Hushai was giving advice meant to derail David's pursuers and he described David and his men as warriors and desperate like a wild bear robbed of her cubs (2 Samuel 17:8 CSB) to those who were attempting to capture and defeat him. And it made me think: when do we become warriors that feel desperate and like a wild bear robbed of her cubs?

I can say without a doubt I felt that way yesterday. And I didn't like it, at all. But just like the Psalm prayer I had journaled before I read these words, God was my refuge and strength, my helper in a time of trouble.

The last thing I want is to let my emotions get the best of me. But I also don't want to deny my feelings anymore. And while it took several weeks for me to take something directly to Jesus to deal with it instead of dressing the wound with a bandage that won't stick or promote healing, I actually did it. What's really amazing is that this was the challenge I issued for all of us during this season of Lent. And here I was, 20 days in, finally doing it.

I will say from a conversation I had a little later in the day, there is a part of me that wonders if I had let the discussion continue on its current course if I would have ended up in tears. I dare to dream. But whether or not I would have, I will celebrate the fact that I learned some pretty incredible lessons about God I want to share.

1. He knows exactly what's coming and He has the ability to set things in motion to help us do what we've been unable (or unwilling) to do before.

2. He will use everything to teach us something about Himself, ourselves, and what He is working out in us.

3. As much as we might want to force our plan and timing, He knows exactly what preparations must be completed to help a truth come to life and (hopefully) stick around for the long haul.

Now, I am not going to advocate that any of us create opporutnities to pick a fight so we can put this all into practice (the lamenting part and turning to God in our times of trouble), but I am praying that sharing what happened with me will help all of us remember just how incredible our God is to put things together in ways only He can. The key is we have to pay attention to everything that's happening and be still long enough to know that He is God. 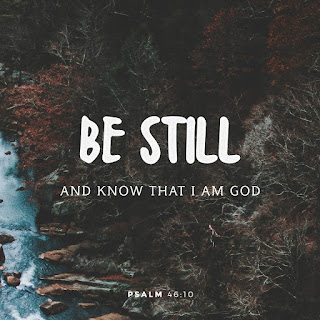