The problem with reading a lot of books is that sometimes you remember reading something that you want to quote properly and you have no idea where on earth it was. That said....

In some book I have read in the last three months it talked about how marriage is one of the things that God uses to refine us. (It also mentioned kids.) Why? Because nothing will bring out the best and worst in us like living in close quarters with others. Beyond that, it will also bring out the deepest things we believe about ourselves.

I have learned over the course of the last 18+ months that I try to be really independent in a lot of ways. I don't like asking for help. Most of this is based on the fact that I don't want to appear needy or high maintenance, but a lot of it has to do with fear of rejection as well. Now, in the case of my husband, this is a ridiculously unfounded fear, but deep down, way deep down, it's still there to an extent.

But yesterday, I reached a turning point. I had such a horrible headache. I mean, it was b.a.d. So, I asked him to rub out the tension in my upper back. Now this I have asked for before but I always reserve this for when it's so bad I can't stand it anymore.  Shortly after this, he offered to get our kids from practice. Now, I really hate asking him for help on his days off because I feel like he works so hard he shouldn't have to do anything. But I actually said ok and then put myself in a scalding hot shower. Y'all, I probably came out pink but couldn't tell because there were no lights on. And slowly but surely, I was starting to feel better and was back to normal (as normal as I can be) within an hour.

Now, if marriage is the analogy we are given as the bride of Christ, what does all this say about me as a wife?

1. I will attempt to do it all myself until I can't. (not good)
2. I will only ask for help in a last ditch effort. (not good)
3. I will humbly say thank you, repeatedly, for what I think you shouldn't have had to do in the first place if I had managed things better on my own.

And, if marriage is the analogy we are given as the bride of Christ, what can I learn about Jesus from the actions of my better, much wiser, other half?

1. He wants to help.
2. He doesn't expect me to do it all.
3. He doesn't need me to thank him millions of times for doing what he was more than happy to do in the first place.

Tucked in towards the end of Deuteronomy 5 is this verse If only they had such a heart to fear me and keep all my commands (v.29 CSB, emphasis mine).

Do you know what command I think most of us have the hardest time following? The one where Jesus says Come to Me.

On Monday, I did do exactly that. I went to Him. It's what I wrote about yesterday. But scarily on Tuesday, the man God put in my life to treat me as Christ did the church, I didn't want to go to until things became so unbearable I finally had to ask for help.

So, why share this? Accountability. Encouragement to remember that not a single one of us learns a lesson one day and is able to apply it the next. And mostly as a friendly reminder to consider that everytime we don't ask for the help we need, we are robbing someone else of the chance to be the hands and feet of Jesus in our lives.

I have no clue what any of us are going to come face to face with today. But I do know that God not only wants us to run to Him for help, but He also wants us to turn to those He put in our lives for reasons and seasons we can't comprehend. The body is meant to function together, with all parts working in harmony. Let's stop trying to be a one-man band. 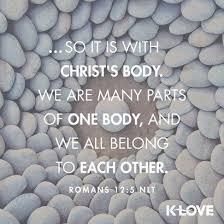