This past Saturday evening something I have known since I was a little girl was completely reinforced: I am NOT an artist. My drawing skills could be likened to a two year old with the exception that I can draw a person with more detail. I know people have bodies and aren't just heads with arms and legs.

However, I also had two other truths about me reinforced. I generally take the long way to get where I need to go and I often can't see beyond the obvious.

For example: during a game of Pictionary the card I drew said I had to draw Nile. And so I began as the timer was flipped. I started with what looked like two stone tablets, a river, and soon moved on to Africa. Did my team get the point? Yes. However, upon sharing the story with my mom she mentioned that it might have been better to draw the river with a baby in a basket. The point: my nickname of Rose (Golden Girls) apparently transcends a verbal retelling of a story and also applies to a drawing. If the point of the story is in the middle of the circle, I will take the circumference and radius to get there.

Next example: the category was action. I had my word. For the life of me, I could not get why this word was in the action category. I could not see it beyond what my first instinct was. And so my quest to draw the beach, and the most pitiful castle ever, all to get my teammates to say sand began. Which they did, praise God. However, after I was done I said, "I just don't get how sand is an action," at which point my husband started rubbing his hand on the table and saying something about sanding something while laughing hysterically. If you are local, please don't tell Lisa. I would like to retain some self-respect. (And I should probably work on homonyms.)

I'm sharing these stories because I can't help but wonder how often we do the same thing when it comes to an assignment, or a word, from God. We look at what He is asking us to do and make it way more complicated than it needs to be, or we can only see one aspect of what He's asked and don't ask for clarity before proceeding. I mean, it's not like He isn't willing to answer our questions or help us. I think it's why Jesus reminded us to ask to receive, (Matthew 7:7) because He knew we wouldn't think to do it.

But there's also another lesson to be learned here. Once Joshua took over from Moses and was leading the Israelites into the promised land, he was told to attack everyone and take over. And he was completely and totally willing to follow that command. He knew the reality of not following through. However, in his quest to complete his assignment, one group met with him, claiming to have come from a distance, and Joshua ended up making a peace treaty with them. Why? Because the men of Israel took some of the provisions (to inspect them), but did not seek the LORD's decision. (Joshua 9) They missed the obvious (seeking the Lord before acting) and only saw one side of the story (the bread they were inspecting which they were told was fresh when those seeking peace began their journey).

What's unfortunate is that this type of behavior started in the garden. Eve certainly didn't consider the whole story before proceeding and she only minimally inspected what she was being offered.

Ya know, God isn't likely to give us the blueprints for His plans like He did Moses, but we know from His word that He is more than willing to help us. My hope is that as we think about the lessons we've learned the hard way, we can move forward and commit to seeking Him first and so that He can establish our steps before we proceed. Personally I'm finally beginning to realize it is likely more effecient to walk a straight path than constantly meandering on the long and winding road. And probably less exhausting. 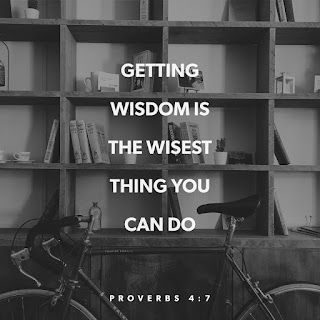