This might be quite possibly the worst example I will ever use to illustrate a point, but it's the best one I've got and it's a true story.

When I was in college there was a girl that did not like me. I am not going to say that her dislike was unwarranted, but I wasn't the only guilty party. Unfortunately, I was the easiest target. Anyway.

On the weekends in my senior year, I had quite a happy social life. That is until a very brief period of time when her presence in the same places I liked to go began to hinder my enjoyment of said places. But, it's where I liked to go, it's where my friends wanted to go, and I didn't want her dislike of me or my perceived threats to stop me. So I went. But every single time I walked in the door, I was undeniably looking over my shoulder nervous, afraid, and paranoid.

While one evening something did unfold, it was not nearly as bad as I had anticipated it would be. But that one incident made me wonder if another might eventually happen. Until I told the one person I believed could/would protect me at all cost.

See, I had a friend that was a rather intimidating presence. I loved him so much. He was the sweetest, kindest, funniest guy I knew. And I asked him if he would go with me because I knew with him by my side, I had absolutely nothing to fear. Not because the situation wasn't still scary, but because I knew who was with me and that his ability to handle anything was unquestionable.

And the reality is, this is no different than what God says. In Deuteronomy 20:1 (CSB) reads, When you got out to war against your enemies and see horses, chariots, and an army larger than yours, do not be afraid of them, for the LORD your God, who brought you out of the land of Egypt, is with you. (emphasis mine)

Did you catch that? It says don't be afraid of them because the LORD your God is with you, not because they aren't bigger, scarier, or more equipped. God isn't asking us to deny reality, He's asking us to trust Him and His ability to handle the situation.

While this may be a horrible way of putting it, this is just like when I went out with my bodyguard and felt more confident that no harm would come my way. The only difference is that my bodyguard was human and not guaranteed a victory while God is not human and already has my victory.

As this brand new week kicks off, let's ask God to help us remember that He is always with us, that He will not leave nor forsake us, and that He is worthy of our trust. If He hasn't let us fall up to this point, I'm thinking He isn't about to drop us now. 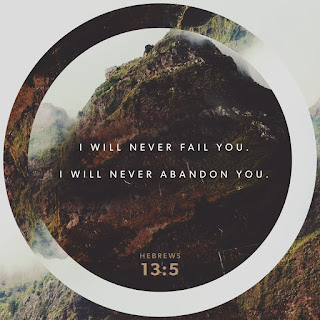