We live in a time where contentment is increasingly difficult to attain and maintain.  We come out with upgraded phones, faster cars, and smart appliances and almost immediately become discontent with what we have.  And it doesn't always seem to be about keeping up with what others have.  Sometimes it's just about increased convenience, comfort, and creating a life with less work because we are so overworked in every other area of our lives.

When I read Genesis 2, one glaring truth strikes me.  God sees our needs and provides for them.  He did it in the beginning and He's still doing it now.

First, He gave us the gift of rest.  He blessed the seventh day, made it holy, and rested on it.  Not because He was tired, but because He knew we would have tendencies to overachieve and ignore our health.  Believe me, I'm preaching to the choir on this one considering what time I am posting this.

Second, He gave us life.  He could have just created us as living beings without putting His breath in us.  However, He chose from the moment of conception (the creation of Adam) to have a way to be with us through the breath of life He put in Adam.  An Emmanuel oppportunity prior to the birth of Christ.  And for the first time I read this and realized that having taken Adam out of the dirt, He's been making us clean from the outset.

Third, God gave us food and made our bodies to need the things He created to keep going.  He could have made 'a leaf' or 'a piece of fruit' enough but instead He gave us the gift of choice.  Lots of choices, attractive in our sight, so we would want them.

Fourth, He's given us resources.  God provided what was needed to maintain His provision.  There was water hydrating the garden because it was necessary to make it grow.  Strategic placement on God's part representative of the living water that wells up in us to produce fruit in our lives.

Fifth, He gave us work.  Made in His image, He knew we would need creative outlets and the ability to do something.  We each have a unique roll to play in His grand design that meets a need for us, serves others, and ultimately brings Him glory.

Sixth, He gave us knowledge.  God always gives us the information we need to survive and the warning that comes from seeking more that what has been revealed.  There is always a reason why the secret things belong to God.

Seventh, companionship.  God created animals because He wanted to give Adam a suitable partner but through the process of creation allowed Adam to see what he needed was one like himself.

Eighth, perfection of design.  God created Adam and Eve ~ without clothes ~ and they felt no shame.  There were no comparisons to make, no mirrors to stand in front of, no scales to stand on, no reason to have an eye that notices someone else.  God was enough for them and they were enough for each other.

I will be the first to admit, I am prone to desiring excess.  Granted my desire for excess is not the typical lot of wants, but it's still there.  But maybe things can be different.  Maybe it really is possible to see all that I have and not have a desire to obtain more.  I can't say I am on a path to becoming minimalist, but I definitely don't want to take for granted what I have been given and seek out more thinking it will satisfy me.

It's easy to see what Adam and Eve were given in the garden and reflect on the fact that they had it all and still sought what they weren't given.  Maybe we can learn a lesson from them and realize that our promised land living might just come from the understanding that we already have everything we need.  Fully supplied by a God that knows our needs and provides for them. 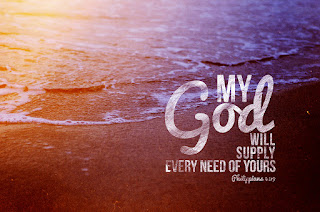