I would venture to say we have all done some stupid things in our day.  I was going to be nice about it and describe them as less than intelligent, but the reality is, they are just stupid.  Many of them might have been done for what we might consider at the time good reasons, or at least enough reason to justify them, but that doesn't make them less stupid, it just makes our motives understandable.

I would like to say that Samson makes me want to tilt my head to the side and just say, "Really?"  But I get him.  Not the part of him that was arrogant enough to believe he could do whatever he wanted without consequence, or the part of him that clearly tested God's limits, but the part of him that was motivated by love, or at least what was love to him.  Granted, it was more likely lust considering he 'saw' Delilah and went to be with her before he ever knew her, but he stuck around after the fact, so there must have been something beyond that as well.

Despite her attempts to render him useless by asking him to reveal the secrets of his strength, and despite his lies and subsequent humiliation of her by making her look like a fool, they remained together.  Eventually she wore him down and he told her everything.  His honesty was the beginning of the end, where everything, literally, came crashing down around him.

Love, or what we perceive as love, makes us vulnerable and asks us to let down our guard in ways we might normally not.  But love should never ask us to do things that go against who we are, bring about shame, or leave us with regrets.  The destruction from decisions that can not be reversed can haunt us for years and leave us scarred, defensive, and broken in untold, unspoken ways.

Thankfully, God is a the God of restoration.  His specialty is bringing what looks dead back to life and giving back what the locusts have eaten.  It's important to understand the magnitude of what it means to be a child of God, labeled as set apart and holy, and bought at a price.  If we could truly wrap our limited minds around the way God thinks about us, the likelihood of us making stupid decisions in the future would be drastically reduced.

Even though we will never live a day of perfection, we can improve.  We need to remind ourselves and others that God doesn't condemn us for not being perfect.  Instead, He reaches out His hand, helps us get back up, dusts us off, and says, "Let's try this again."  Not in our own strength, not by our own grit and determination, and never alone.  The beauty of His offer is that let's means 'let us', Him with us.

Jesus, the scars in Your hands, feet, and side prove the depth of Your great love.  Love that is willing to lay itself down for the object of its affection.  Give us the wisdom to begin to understand a love that's so deep, wide, and immeasurable that we don't compromise or underestimate our worth.  In Your eyes we are priceless, help us to live like we believe it.  Amen. 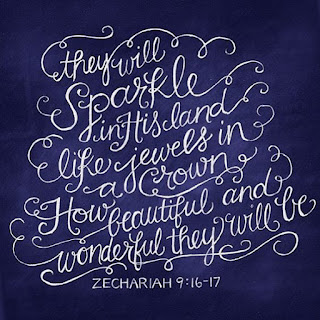