Too much or not enough?

The story of David and Goliath is familiar.  It's not easy to think you can read it, again, and find something new or exciting.  And while each translation varies slightly, the NIV offered some insights I hadn't seen before.  The most notable, that Goliath had a shield bearer before him.

Apparently it was common practice to have someone protecting the leader or the strongest fighter, but Goliath was 9 foot 9 inches tall and he had someone in front of him carrying a shield.  First, if the armor bearer were to try to deflect an arrow from Goliath and he had to raise the shield up, he wouldn't have been able to adequately protect his head.  Unless he was tall himself or had unusually long arms, in order to maintain possession of the shield, he could only lift it so high and hold it steadily.  Second, if the Philistines were protecting him, they also knew that without him, they had major weaknesses that could be overcome.  Third, Goliath was shouting to the ranks of Israel from his position, taunting them to meet him in the middle with their chosen fighter.  I don't know why I never noticed that this entire ordeal, up to the point of David's involvment, seems to be nothing more than a staring contest with smack talk.

But David did show up and things changed.  Right or wrong, he was offeneded for God and was not about to let the smack talk go.  Despite the strained relationship with his brothers, and their questions regarding his motives, David believed in God enough from past experiences to take on this giant of a man.  Furthermore, his appearance was enough to incite Goliath even more.  Goliath noted that David was 'little more than a boy, glowing with health and handsome, and he despised him.'  This just shows that even those who fit the part of bravery, strength, and courage, can still have significant insecurities.

Yet what strikes me most about this account is David's confidence.  Saul dressed David in his armor and David basically said, "Thanks, but no thanks."  He was aware of the gifts and talents God had given him and he was trusting God to make them enough against his opponent.

There are days that I struggle with thoughts of being too much and not enough at the same time.  Am I too much for someone to have a conversation with because everything utlimately comes through a lens of faith?  Am I not enough because I don't have a standard career outside of taking care of my family?  Am I too much because I'm open and honest about my struggles?  Am I not enough because they are still struggles?  So many aspects of my life seem to put me in one category or the other, and quite often both, by the sheer nature of their characteristics.

But like David, I can trust that God.  I believe He can take my not enough, or my weaknesses, and let His power rest on me to make me strong.  I also believe that He can take my strengths, infuse them with that same power, and work through me to do things that can only be of Him.  Either way, I know He can meet all of my needs according to His glorious riches in Christ.

Every day, like David, we make choices based on what we are facing, feeling, and experiencing.  We can choose to trust God or rely on ourselves.  But like Goliath, we also have a shield bearer.  God promises to go before us wherever we are headed and that we are never alone because He is always by our side.  Maybe the time has arrived for us to walk boldly into the battles that are coming our way, trusting that we are enough to deal with them because He has made us enough, and is enough Himself, to see us through.

Father, we want to be brave and bold.  We want to be courageous and strong in our faith.  Remind us when fears creep in, that you are not only going before us, but will give us exactly what we need to see it through to the end.  Strengthen us with the knowledge that Your grace is always enough.  In Jesus name, amen. 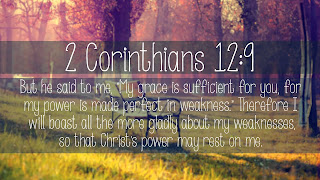