From the fitness industry, we learn that working the biggest muscle groups, such as the ones in our legs, back, and abdomen, are crucial to build definition, reduce fat, and lose weight. While there is a common misconception that muscle weighs more than fat (not true....one pound is one pound whether it's milk, butter, or steak ~ it just takes up different amounts of space), there is one muscle in our body, the strongest of all, that we hardly ever think to exercise. The tongue.

James has some harsh words about the roommate of our teeth. He tells us that it is a restless evil full of deadly poison that no human being can tame, and then warns us of our hypocrisy in that with it we praise our Lord and Father and curse human beings who have been made in God's likeness. Neither of these things are good and certainly should not be evident in the life of those who call themselves Christians.

Luke 6:45 tells us that A good man brings good things out of the good stored up in his heart, and an evil man brings evil things out of the evil stored up in his heart. From the mouth speaks what the heart is full of. We have to be willing to take a deep look inside of ourselves and put our heart on God's altar to ask Him what we've got going on inside of us because a lot of what's in there, we put there ourselves. We also have to accept that when James tells us that we can't curse people made in God's likeness, that includes us.

Here's the thing: our words fertilize the soil in our hearts from the seeds God has planted. We either napalm what He put there or we cultivate it with more of His truth. The result is either a sweet aroma or pollution. If we choose the former, that's what will be directed towards others, if we choose the latter, guess what?

Sometimes I think we are so afraid of becoming boastful that we don't want to remind ourselves who we are. But if we believe the promise of God's word that tells us He sends it forth to accomplish what He intends, won't declaring His truth over ourselves just make us stronger representatives of Him in the world? I can't imagine that the purpose behind His words was ever to make us selfish, arrogant, or boasting fools. And if we're really concerned about our predisposition to get carried away, couldn't we just pray that we'd be guarded against that as we declare His truth over us?

A couple weeks ago I wrote about my son calling me out on some words I directed at him that were a bit on the sarcastic side. That load of mom-guilt weighed a ton. And to be honest, it's why I chose to memorize Ephesians 4:29 Do not let any unwholesome talk come out of your mouths, but only what is helpful for building others up according to their needs, that it may benefit those who listen. Any time I read that verse, I always thought about it being geared more towards those who might be within earshot; it never once occurred to me that it would include me hearing my own voice and either fertililzing or napalming the truth of God in me.

Most of us probably aren't walking around giving ourselves peptalks, but we do need to become more aware of what we are saying to ourselves. And if we pay attention to when we feel icky, maybe it's an alarm going off that we need to remind ourselves who we are in Christ and say something kind about ourselves. For all the red words we have in our Bibles, I don't ever recall reading any where Jesus had harsh or critical words for Himself. Maybe, as in all other things, He was setting an example that we should follow. 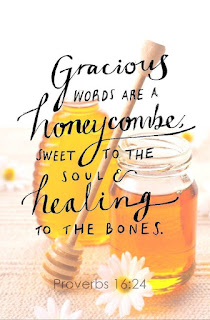