As humans covered in flesh with hearts that are divided and judgemental, it is difficult to hear someone we do not respect as a person quote Scripture. It's too easy for us to ignore the beauty of the words they are saying because they are in a package we wouldn't want delivered to our door. And what makes it worse, is that we often stand in self-righteous indignation if we think their hearts aren't sincere. I know this because I was recently confronted with this particular sin in my own life.

While I sit before you writing, I am able to say that I do not believe that what the person was saying was Biblical; however, I do not, and did not, have the authority to judge them or what I thought would cast a bad reflection on me or anyone I know, that as a Christian, would disagree with their words.

When we read the words of Paul to the Phillipians in chapter 1, he tells us about those that preach for the wrong reasons (selfish ambition), but that in reality it shouldn't matter as long as Christ is being preached. The words are what matter, not the deliverer. Additionally, if we believe the words Isaiah wrote in Chapter 55, we should be comforted to know that God's word will accomplish the purpose for which He sent it, not the damage we think it will do because of the person who said it.

But I want to issue a few not so simple challenges for us. First, when we hear the word of God preached from someone we think could do it harm, we need to immediately stop and pray for ourselves. #RemoveThatPlank Second, after we realize our judgement, pray for God to reveal to us why we feel this way. Third, stop to thank God for His promise to let that word do what He means for it to do, not the damage we are assuming it will do. Fourth, ask God for eyes to see that person as He sees them. And finally, be thankful that our ears are sensitive enough to the word of God that something unsettling was apparant.

As Paul continues his letter to the Philippians, he exhorts us to conduct ourselves in a manner worthy of the gospel of Christ. Jesus' message was for all and while we may have human inclinations to want it only to be held by those we hold in esteem, we need to remember that God holds us all in esteem and that the Great Commission was for all not the few.

I am in no way proud of my reaction the other day, and to be honest it was purely selfish and prideful because I thought this person's interpretation of Christianity was going to make me look bad. Ugly, I know. And so rather than dwell on my fault, I will move forward in grace, aware of my shortcomings, and thanking God that His word was put forth in the first place. Because His word going out is all that really matters anyway. 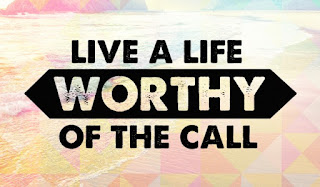