Most of us probably know that if we need to pick up something heavy (kid, furniture, 16 bags of groceries at one time) we aren't supposed to lift with our backs. And some of us probably know that if we do a decline push-up or a basic plank with poor form, we're going to injure our lower back and probably strain our neck. Technique is everything when it comes to lifting and holding weight. Thankfully Jesus has done the heavy lifting on our behalf.

Hebrews 10:11 tells us: Day after day every priest stands and performs his religious duties; again and again he offers the same sacrifices, which can never take away sins. When we pick this verse apart we find a few interesting things.

First, the priest is standing. Knowing we are all priests now in God's kingdom, if we are of the female variety and happen to be wearing heels, it won't take long for this to get tiring.

Second, we see that again and again we are doing something. Doing anything repeatedly is not only monotonous and boring, but it loses its effectiveness because it becomes so automatic there's nothing intentional about it.

Third, we are offering the same sacrifices. You know, all the things we're going to give up because our behavior will make us holy. Except not because we keep returning to them.

Thankfully there's a verse 12. But when THIS PRIEST had offered for all time ONE SACRIFICE for sins, he sat down at the right hand of God. (emphasis mine) Praise God for the work of Jesus on the cross. He took care of it for us. The problem is we don't act like it.

More and more I tend to find myself constantly offering up what I think is going to please God. Most of this goes outside of what I know He's called me to do. And while it would be good if it were a response of worship, more often than not it's out of guilt and an attempt to make myself more acceptable, more lovable, more like Him. Except if He's already created me in His image, I can't improve upon what I've already got. Just ask Eve.

As we continue further into Hebrews, chapter 12 verse 1 tells us to throw off everything that hinders and the sin that so easily entangles. Why? So we can run with perseverance the race marked out for us. Personally I find this concept fascinating.

If a plane were going down or a ship were about to sink the logical thing would be to lighten the load. And since we know we can't sacrifice our way out of our sins, we have to throw them off instead. Like as far as we can. And sometimes that means tossing it and then running the opposite direction completely so we aren't tempted to pick it back up. And when we've got less to weigh us down, it's not only easier to run, it's significantly more enjoyable.

Philippians 4:8 tells us all the things we are supposed to think about like the good, lovely, the excellent and praise-worthy. But that doesn't come naturally and it's going to require some practice....or more accurately, some discipline. Discipline that renews our minds, attitudes, and hearts and produces a harvest of righteousness and peace.

While we may find this transition difficult, we have to accept the fact that we can not have a renewed mind thinking the same old thoughts. It will never happen. If our default mode remains securely in place, we can't fully embrace the freedom Christ has given us because we'll just keep performing the same religious duties and offering the same sacrifices again and again hoping this time will be different. If all we do is maintian the status quo expecting different results, we'll drive ourselves crazy.

We don't have to get out a piece of paper and brainstorm what's hindering us. Some things we know because we've known for awhile and just haven't thrown them off yet. And over time God will reveal the things we don't see that are weighing us down. Because at least from my experience, the closer I move to Him, the pickier He seems to get.

Let's make today the day we start strengthening our feeble arms and weak knees by lifting some of the heavy weights and throwing them off. Let's stop doing the same things over and over and try something new. And let's accept the discipline He's been trying to instill so that we can share in His holiness knowing that once we've been trained by it we'll be flouring in a frutiful orchard. He promises to make it worth it and we already know He keeps all of His promises. 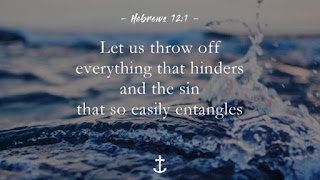