One of the greatest joys in my life is watching the weather forecast in winter. There are many superstitions in our local area regarding the possibility of a snow-day being called and the kids getting an unexpected day off. First, we are to sleep with spoons under our pillows, next we wear our pajamas at least inside-out and if possible backwards, and finally, we flush an ice-cube or two in the toilet. Rarely does this work, but it is a joyous occasion when it does.

Unfortunately, the predictions of the weather calling for at least enough snow to get us the minimal two-hour delay are often about as reliable as a lottery ticket when the jackpot reaches in excess of $500 million. Hearts are broken, attitudes are poor, and disgust generally defines the emotional reality of the morning when there is no snow on the ground. And that's all before I even wake up my kids on-time to get ready for the day.

What we can count on, though, are the words of Jesus. In John 16:33 Jesus tells us, "I have told you these things, so that in me you may have peace. In this world you will have trouble. But take heart! I have overcome the world."

Now, I will be the first to admit that people make mistakes. I will also willingly acknowledge that just because "a" does not mean "b" must happen. Will it? Quite probably, but maybe not. There is always hope.

Last Friday I had to have my lab work done in preparation for a doctor's appointment. One of the markers that is checked for lupus is called ds-DNA. It is an indication of lupus activity. Typically there are other markers that would appear in my lab work if it's active that did not show. However this marker, the ds-DNA, a positive is considered anything above 9. Since getting under control in late 2008, the highest I have seen mine has been 22. For that period of time, that's really excellent considering at some points, it's been negative in activity, meaning the level was 8. Friday's results? 179. You know what they say, Go Big or Go Home.

When things like this happen, particularly after such a long period of repreive, we have to ask ourselves are we really only willing to accept the good and not the bad? And while the chances of this being a lab error aren't likely to be in my favor, I am still holding out hope until it can be repeated to be sure. But with the looming prospect of what my life looked like all those years hanging in the balance, I can honestly say, I'm not super excited about the storm that appears to be brewing off the coast.

But these are the moments that the hope of what we know come to mean the most. I told a friend yesterday that I don't have time for this. School will be starting in a few weeks, the cross-country season is upon us, my daughter wants to do water-polo, I'm helping a neighbor regularly, I am anxious to get back to volunteering, and Bible study will start on Friday mornings. This really isn't an opportune time to have difficulty staying awake. (I used to get so tired from taking a shower I had to nap.)

Again though, I have to ask myself, do I trust the God who is in control, or myself who pretends to have some?

What's interesting about this unexpected turn of events is that I have an incredible sense of peace. Not because I think the road will look exactly the same as it did last time (although the hair loss that has been happening could certainly be indicative of one similarity), but because the same Jesus that walked with me holding my hand before is the same one that will see me through it this time around, if that's what's coming. (I clearly have not given up hope that it's a mistake. I really, really, really want it to be a mistake.)

My encouragement for all of us today is to believe His words. Cling to them as if our lives depend on them because they do. We can not accept defeat from anything if we know He has clearly been victorious on our behalf. When you look at the list of these things it is extensive and all inclusive. This isn't a sissy list, it's the hard stuff. The stuff that will make you but can never break you because it doesn't have the authority to do so.

Wherever we find ourselves today, whatever unexpected additional news pops up, I pray that we will all stop immediately when it comes and take a minute to remember that whatever storm we are preparing to face, or is threatening us with thunder and lightning in the distance, that God can stop it before it starts. If the wind and waves still know His name, we can always say It is well. 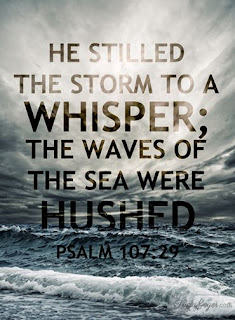