In March of 2008 I started to get sick. We didn't know what was wrong or why. We were clueless as to whether or not I would get better and how far it would have to go before that day would come.

In May of 2008, my illness was given a name. Systemic Lupus Erythematosus. The name, while long, didn't scare me. Knowing what I was dealing with was its own special brand of healing. Unknown things are quite scarier, but known things, exposed things, lose their power because their threat disappears.

In all the years I have been unable to cry, I traced the root back to its starting point. It came in early 2011. Knowing where it was, I thought, would give me the possibility of fixing it. I asked myself if I could be depressed and searched all possible symptoms. Some fit, some didn't. I actually tried a short term anti-anxiety medication. Didn't work. I tried going gluten free again because there is some evidence that with auto-immune thyroid problems (which I also have) gluten can increase anxiety. Didn't make much of a difference, and I missed toast....and pasta......and the occasional bowl of raisin bran.

The biggest obstacle I was facing was that I didn't know what the conditions were that led to the result. Being unable to cry, or feel much of anything, was a symptom. It still didn't have a name. Until now.

First, I can say now that I know that certain predispositions within my personality are the reason this happened.

Second, knowing what it is has given me a great starting place, even though the only thing I can do about it is pray.

Third, understanding the purpose behind it leaves me with no choice but to believe it will end and I will be better for it.

Fourth, prior to finding out it was my problem, I had read two books and listened to two people talk about it, but didn't investigate it far enough to find out sooner.

Fifth, the book I got late last fall that I started and stopped but recently picked up again, contained the answer. And I am quite certain that all the other books I have read in the interim were foundation work to get me to the point where I'd be willing to do the hardwork that was about to be required. That job description? Wait.

And the diagnosis is: Dark Night of the Soul

Description: (as referenced by Peter Scazzero and Gerald G. May in his research and applicaiton of St. John of the Cross' writing on the subject)

"How do we know we are in "the dark night?" Our good feelings of God's presence evaporate....Darkness, helplessness, weariness, a sense of failure or defeat, barrenness, emptiness, dryness descend upon us. The Christian disciplines that have served us well up to this time "no longer work."

"This is God's way of rewiring and "purging our affections and passions" that we might delight in His love and enter into a richer, fuller communion with Him......He works to free us from unhealthy attachments and idolatries of the world."

"St. John of the Cross knew our tendency to become attached to feelings of and about God, mistaking them for God Himself. These sensations, rich or empty, are not God but only messengers from God that speak to us of Him. There is no other way, John of the Cross would say, for our souls to be strengthend and purified so that we don't worship our feelings than for God to remove them altogether."

"Ultimately God chooses the length and level of intensity. He has a unique purpose for each of us, knowing how much there is to cleanse out of our inner being, and how much He wants to infuse of Himself into us for His greater, long-term purposes. Our Father knows how much we can handle."

As unsettling as this is, I am glad to know. Why? First, as I mentioned above, I know it will end. Even if I don't know when, I know it will. And second, I now know for certain that I am not out of my mind. This hasn't all been in my head, it has been very real, and it has been quite intentional.

The good news is one major control issue I had that was most definitely an idol has been purged. Like, God used two situations and two major conversations over the course of seven months and burned that bad boy to the ground. It was an ash heap that turned into something so much better than what I was cultivating on my own.

More good news? I can label a few of my other idols and pray for God to reveal the rest so that I can pray about them and let Him rewire me. For those of you who know me personally, one of them is music. If you think about that long and hard enough, you are probably either rolling your eyes as if to say, "Duh!" or you are thinking about one of the quotes above, realizing how it was an idol, and are maybe a little frightened to think of what might be an idol in your life that you don't realize. (And ladies, this is your absolute permission to smack me if I mention music on Friday morning unless I am directly speaking of how God revealed Himself through it and what He taught me by it.)

I don't know if anyone else understands this. But if this sounds at least somewhat familiar, I encourage you to pray and see if God is trying to tell you something about yourself or someone you love. It's not going to be an easy road, but if at the end I am restored to what God always intended, the relationship with God I will have gained will be worth it. And I can only imagine the praises that will be going up when my tears come back. 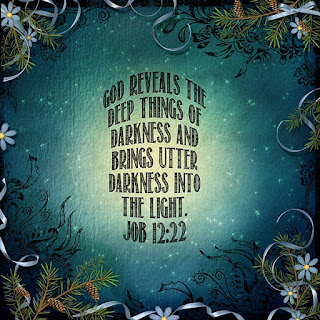