Radar: (1) a device or system consisting usually of a synchronized radio transmitter and receiver that emits radio waves and processes their reflections for display and is used especially for detecting and locating objects or surface features. (2) range of notice.

I would venture to guess that the majority of us don't like to be scared. I would also assume that most of us laugh hysterically, albeit sympathetically, when we watch videos of Ellen Degeneres either scare the living daylights out of a guest while interviewing them or when she sends her producer to a a haunted house. We might not enjoy it ourselves but we do think it's funny when it happens to someone else.

Now, the advantage to her guests or her producer is that they are suspecting that something is coming. Or at least by past precedent they should be. Their personal radars should be not only turned on but to the most senstive settings.

When Nehemiah went back to Jerusalem to start rebuilding the wall, he was, as you might recall, met with opposition. Not direct at first because his opponents didn't think he'd be met with any success. But when they saw he was making progress, this is what they said, "Before they know it or see us, we will be right there among them and will kill them and put an end to their work." (emphasis mine)

We know from 1 Peter that our enemy is looking for someone to devour. My fear is that we don't have our personal radars on because we assume it's not going to be us. We think it will be someone who's more prominent, doing more work for God, or would make a louder thud when they fell. And while we have seen the way he attacks those with larger than life platforms in order to cause mass destruction in a short period of time, the truth is, if he can get to us and destroy our homes and our circles of influence, he can do considerably more damage than we think.

We can't go through our lives paranoid, but we can take steps to be more aware of what might be trying to creep up on us without our noticing. We can identify the negative thoughts and words from ourselves or others, we can learn to recognize the symptoms of exhaustion that lead to defeat, and we can proactively protect our minds with the truth of God's word in order to defuse any lies that come our way. We have to stop giving the enemy the advantage because we aren't paying close enough attention to what's happening around us.

Just before the enemies declared their intent on the wall builders, the people in Judah said, "The strength of the laborers is giving out, and there is so much rubble we cannot rebuild the wall." The Bible doesn't say that this comment was overheard, but it kind of makes me wonder.

If our mission is to make God known, then our enemies mission is to discredit him. And the enemy knows where to sneak up and attack because of the words he hears us say. God hears our prayers but Satan is intently listening to our doubts. And if we need to express our fears and shortcomings to get it off our chest, we need to immediately cover it with a blanket of truth before we just let the enemy cover it with the warmth of hell. Because he is all to willing to 'come to our rescue.'

Nehemiah has a lot to teach about perserverance in the face of adversity. We were never once promised that our lives would be nothing but sunshine and roses. But like the people who built that wall so that they would no longer live in disgrace, we can fortify our hearts and minds with the promises of God and keep the enemy at bay. It's an investment of time and intention, but the rewards of peace and joy will be so worth it. 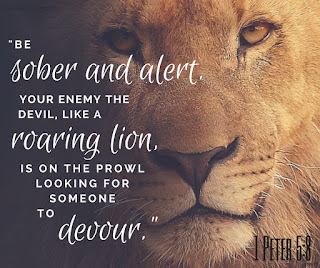