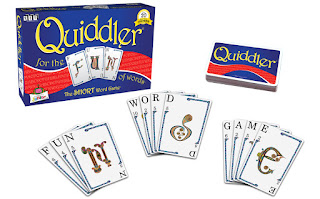 I love word games. I am not particulary good at Scrabble. That's not true. I'm horrible at it. On the other hand Bananograms (a game where you are given tiles and essentially try to beat your opponent making a crossword puzzle) and Quiddler (pictured above), I can pretty much hold my own. My prefernce however is Quiddler.

In this game you start round one with three cards and make at least a 3 letter word. I say at least because some cards have two letters. The came continues through round eleven where you now have thirteen cards. Scoring is based on the numbers on the cards in your hand and bonuses are given for longest word and most words. I play this game a lot. For me the challenge is in making new and interesting words. However, no matter what word you may be thinking of making, you are at the mercy of what you are dealt, what you draw from the pile, and what your opponent discards. Regardless, it is truly very fun. (Just to try it out, what words would you make with these letters: GSOOVRDUESA)

Life is so much the same way. We don't have control of what we are going to be given. The only option we truly has is to make the best of what we hold in our hands. Sometimes we need to rearrange our options, let go of what's not adding value, add what we think will increase value, or just hold tight where we are waiting for the one thing we need to make everything else fall into place. To some degree strategy and skill come into play, but the majority of the time, we have to go on what we most know to be true.

As I've been going through the story of the prodigal son and the historical aspects of the story, today I had to answer this question: What do you think the father might have thought as he looked down at his own tassles and headed back to his own beth ab? (To clarify: tassels are white the Jewish people attatched to their garment remind them of the commands they'd been given by God and the beth ab would be the "father's house.")

It's hard to imagine all of the thoughts that went through the father's mind when his son left, but the one thing I kept coming back to was this: He had to focus on what he knew to be true of God and the miracles he could perform.

Most of us aren't likely to find ourselves in a position where anyone asks us for the inheritance they will get upon our death before we die, but it is pretty safe to assume that at some point we will be dealt a card we don't want to hold. Whether it's a diagnosis, a death, a loss of some other sort, or a change we weren't seeking. Whatever the case may be, we will be faced with decisions we don't want to make and probably aren't prepared to. But in the midst of all of it, we have the option to hold on to the truth of what we know in our hearts and minds about God and the evidence of his work that we've seen in our lives or to cower in fear and uncertainty.

What I have found to be most true is that even when we are caught off guard, God has always had our best interest at heart. Whether it was a blessed subtraction before all hell broke loose or a need being met before it even arrived, he has never once failed any of us. He simply can't, it's not in his nature.

I don't know what battle you are currently facing or what cards you have in your hand that make you think that you are going to lose more than you can cover, but I can promise you that they can be rearranged to make better words that are full of promise and hope because God never deals a bad hand, only a hand that forces us to hold tighter to his. 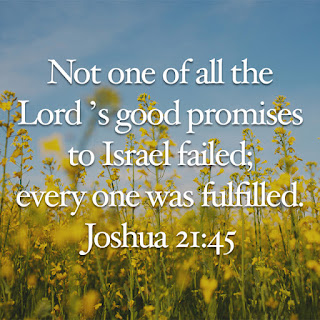 When you rearrange the letters: Our God Saves