Let's say you have two kids and you assign each one a task. The first one you ask to vacuum all the carpeted areas in the home and the second one you ask to clean all of the glass surfaces. Both do their job to the degree you would expect it to be done. When complete, you tell them both thank you and give them their promised ice cream.

This should be the end of the story. Except it's not. Because now you have two kids arguing over who did a better job. And they are both begging you, pleading with their eyes, to give them the highest commendation for their completed work. What do you do?

It's obvious to you that their argument in ridiculous. First, they both did exactly what they were told to do. Second, they both did it exactly the way you expected it to be done. So why do they need to compete? Is it just their human nature? Does each secretly have a desire to be favored? Are they really that competitive?

But let's add soemthing extra. The first one that did all the vacuuming added, ON THEIR OWN, dusting. No more writing names on top of the entertainment center or book shelves! The one who cleaned all of the glass surfaces added, ON THEIR OWN, scrubbing the kitchen and bathroom floors. You didn't ask either to do it, but both went above and beyond the call of duty of what was assigned.

It might be tempting as a parent to want to do more than you promised for the extra effort, especially if your offspring tackled a particular job you don't like. The problem is you are aware of the motive behind it.

The first child bombed a test they didn't study for. They are trying to make up for their lack of preparation to earn your grace because they didn't follow directions to study. The second child went to a friends house and played a video game they know very well is forbidden and they are reasonably sure you found out about it.

Again, these are two completely fictitious scenarios, but there is a point: We do the exact same thing with God.

We do not want to put on the yoke he's created for us because there is some aspect of it we are resisting and so we add sacrifice and offering to our to do list to make up for it. OR worse yet, we don't give God the time and space he needs to talk to us and so we continue on our merry way adding what we think makes up for the fact that we aren't seeking his plan before proceeding with ours.

I know this isn't pleasant to read but keep in mind that I'm reading it first as I write it. God has been pointing out this very problem in my life across the board. I make up my own set of instructions to achieve a result that I want to see realized because I don't like his plan. Instead I throw in my ideas for 'extra credit' to butter him up  trying to make up for the fact that I'm not following directions and miserably failing in places he's offering victory.......if I would just choose to do it his way.

My hope is that awareness will help us submit our hearts, minds, and actions more fully to God and his leading. We might not have a cloud pillar to lead us during the day, or a fire to light our way at night, but we have been given the gift of his spirit. Personally I am convinced that when we are miserable and frustrated it's because we are grieving that spirit with our lack of obedience. And again, the only reason I can write this is because it's a reflection of my life first and foremost.

The beautiful part is that God's grace covers us as we go through massive learning curves. We wouldn't love our kids more or less for adding the extras to what they've been asked to do, but we would hope they wouldn't feel a need to do them because they dropped the ball somewhere else. We just honestly want what's best for them. And the condemnation and shame they might heap on themselves trying to make up for it is not something we'd desire for their hearts, and it's not something God desires for ours.

Getting to a point where we just do or go because we've been called to do or go is not going to come easily. And honestly our flesh is always going to get in the way. But we can pray and seek God to decrease our turn around time to get back on track sooner, and we can beg him for the help we need to keep our stubborn hearts submitted to his ways. And throughout the process I bet that if we would listen attentively for his voice, each time we step in the right direction we'll hear him whisper, "Well done my good and faithful servant." 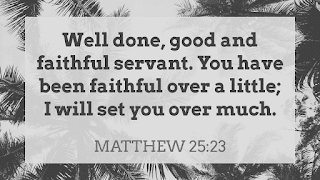