Most days I'm okay. Mentally and emotionally that is. I make a concentrated effort on being positive, seeing the best in situations, and not letting the less than perfect bother me. A prime example of this came just over 2 years ago. My uncle suffered a heart attack, ended up unconscious for too long, was revived, but sadly had so much brain damage, he had to be let go. The journey started July 8th, it ended July 28th. Twenty long days. Day twenty was my 41st 29th birthday. The day after he passed I picked up a birthday cake for a friend that brought me flowers and asked me how I was doing. She said she was sorry that he passed on my birthday. I said it was fitting because my birthday parties as a kid were spent in his pool. Somehow that made it better.

Right now I am not however feeling postitive. My repeat labs were done on Monday. Not only did the number we need to go down go back up slightly, but I've had to increase the medicine I don't want to be on, I had to add back in the medicine I had done as a tapering dose to start with, and I still feel horrid. On top of which I am over the modified exercising, I have a hard time staying awake, my joints are getting achy, my muscles are getting weaker (hello, a full coffee pot is hard to pour right now), and I can't get a decent night's sleep to save my life.

Months ago I would have recited every verse I've memorized and given myself ever Christian platitude I know to remind myself of what is true: God is in control, He knows what He is doing, this is for my good and His glory, and He is my strength. Those things are all well and good, but it isn't enough right now. Right now I need to be really honest with exactly how I feel about my situation. I HATE IT.

My jaw hurts if I talk or smile too much. This makes conversations particularly hard and I like to talk. A lot. Because my brain feels like it's in a dense fog, remembering to do things without lists everywhere is almost impossible. (I forgot to get my daughter's lunch ready this morning. #MomFail) And seeing as how I'm exhausted, I'm lucky if I can get through 4 pages in a book without nodding and losing my place. Do you know how long it's taking me to read an entire book? I'm on two weeks for my current selection and it's really, really good but I'm really, really tired.

I'm not sharing any of this because I want someone to come to my rescue. I'm sharing because up until this point I would have continued faking it and acting like everything is fine. But that doesn't benefit anyone. It's a lot of what's wrong with our relationships in the first place. People can say really insensitive things if they don't understand what's going on but they can't know what's going on if we aren't honest about it.

Holley Gerth wrote in Fiercehearted, "It seemed the prevailing mantra in those days was, "Be a good witness for Jesus." A positive example must be a flawless one. Fake it until you make it. But in so many ways, this led only to striving or rebellion."

First, she's right.
Second, a flawless example for Christ has to be an honest one and if you are faking it until you make it, IT IS A LIE. And lies hurt us and those who believe them.

So here's the thing. I know this flare will end, one way or another. I know I probably have more hard days ahead than I want. But I also know that I will not pretend that it's easy or that I don't need to rely on God to give me strength which I am not likely to ask for because I know what I'm capable of when I'm healthy. But I suppose the best news in all of this is that Jesus himself said that he came to heal the sick. And while I'm always lumped in with that group because I'll never live a sinless day and sin is a sickness all its own, he also healed a lot of people that were physically sick. And for the time being, I am being counted among them. 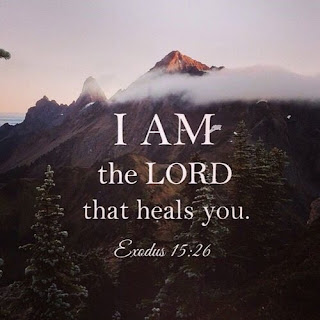