February 22, 2018. We are officially into the new year with 52 days under our belts and on the brink of day 53. How are your New Year's Resolutions going? And all the readers let out a collective sigh and immediately came up with why some of them have fallen by the wayside.

One of my resolutions this year was to accept a challenge called Word Before the World. The idea was to put my eyes on God's Word before checking anything else in print. So, no facebook, twitter, email, checkbook balancing, credit card checking to make sure it wasn't compromised, etc. And until this week I was doing really well. Actually until Tuesday, when I tweaked something small. Now before I read I do my steps with praise music blasting in my ear. I kind of think of it as the worship set before the sermon. I kind of like it because my head is on straight before I open my Bible. Which is critical for a day like today.

At the beginning of the year I shared that I was going to do a chronological plan through the Bible. Some days I've read a little ahead, but basically, I'm about where I should be. Today was Numbers 7. And again, all the readers let out a collective sigh. Numbers is not exactly the thrilling read of the Gospels, one of Paul's passionate letters, or the intriguing stupidity of the bad kings of the divided kingdom. And worse yet, chapter 7 in Numbers is a whopping 18 paragraphs and 12 of them basically repeat each other with the exception of a few words: the day and the names. Not exactly something that is apt to keep us on the edge of our seats.

But if God thought it was important enough to include, there must be something significant that we are supposed to see. Go ahead and read it.

Boring? Yeah, a little bit. But here's what I realized in reading it.

From the beginning, we see that this is going to be about gift giving. Some of the gifts were given to people and the rest were given to God.

As for the gifts given to people, they were the resources they needed to complete their assignments. But here's the thing: while the gifts for two of the groups were the same, the amounts were different. Why? Because they had different amounts of responsibility. And the third group didn't even get any gifts. Why? They didn't need them.

So the question is this....when we see someone else with a gift, are we happy for them or are we too focused on wanting the same thing for ourselves? And the next question is this....do we realize that all the gifts we are given have an underlying purpose?

Sometimes I think we look at God's blessings as just because He can. And while I agree that there are things He gives just because He can, if we miss the fact that there is always meaning, intent, and purpose, we are missing a huge aspect of God's character. It occurred to me that some of those gifts that may be primarily for us are meant to build our faith, increase our trust, and/or display His glory. But if we just send a thank you note and don't acknowledge what it's done for our heart, we're short-changing ourselves big time.

Now the bulk of chapter 7 is about the dedication gifts given for the altar when it was annointed. And each of the twelve tribes gave the same things, one tribe per day, for twelve days. It's hard to imagine Moses not getting bored with this. But what's thrilling is that God didn't get bored with it.

See, each gift we give to God matters and He sees them individually ~ even when others give the same gift because they are representative of the giver and He knows the heart behind it and the sacrifices made to give it.

For example: let's say each of us does some volunteer work. What it costs you to do it and what it costs me to do it is not going to be the same. You might be giving up an hour of sleep in order to make the time, while I might be giving up an hour of TV. The gift of service is the same, but the sacrifice behind it isn't. And God saw that. All the silver bowls, all the incense, and all the animals were the same, but what it costs to give those gifts from the people would have meant something unique to each person and God was well aware of what it was.

We have to stop thinking that what might seem like small acts comparatively to others, are not small acts to God. To Him they are just as significant. He knows where we've been, how far we've come, and what is going on in our hearts. And the gifts, never get old to Him because we never get old to Him. He still sees us like He's looking at us for the first time. 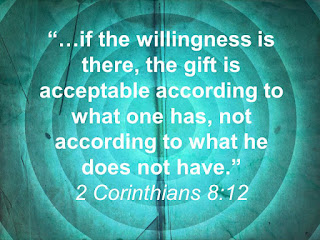