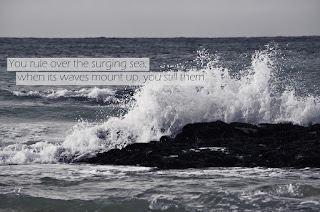 In the beginning, God spoke creation into existance. He commanded it, and then it happened. And God said, "Let there be....."

As He got into the boat, His disciples followed Him. Suddenly, a violent storm arose on the sea, so that the boat was being swamped by the waves ~ but Jesus kept sleeping. So the disciples came and woke Him up, saying, "Lord, save us! We're going to die!"

He said to them, "Why are you afraid, you of little faith?" Then He got up and rebuked the winds and the sea, and there was a great calm.

The men were amazed and asked, "What kind of man is this? Even the winds and the sea obey Him!"

And so here is our thought provoking question to ponder over the weekend:

Why does creation do a better job with obedience to the Lord than we do?