A couple of days ago, I watched The Shack with a friend. I'd seen the movie before and loved it and thought she might like it as well. There is a scene that struck a chord with me the first time that was just as difficult the second time.

In the beginning of the movie, the Holy Spirit collects a few of Mack's tears in a bottle telling him that we all collect things we value. For those of you who know I haven't a good cry since February of 2011, you know about how well this went over.

Towards the end of the movie, all the tears that had been collected from Mack over his lifetime were used to water a certain plot of ground. Flowers begin to grow, a beautiful tree sprouts, and God says it does a body good to let the healing waters flow. Yeah.

Because I wanted to show this to my husband, I found the clip on youtube. As youtube often does, it had 'suggestions' down the side for other related videos. #DivineSetup

I saw a video of a sermon preached at East Side Baptist Church in Missouri about The Shack. Of course I watched it. For your viewing pleasure......

If you are willing, fast forward to about minute 24 and watch until just before minute 27. What he says might sound familiar.....I've written about it a few times. Why? Because this is something I still struggle with, and while it might sound arrogant to believe, I know I am not the only one.

The point is this: Jesus says, "Come to Me."

As we are on the brink of Lent, I am issuing a challenge for those of us who feel led to participate. This will probably be uncomfortable at best, down right difficult at worst. I would highly recommend getting a journal or tiny notebook or something to help because this is not going to be a simple exercise.

Throughout Lent, every time something happens that shakes us.....a news story, a friend's story, a personal struggle, we are not going to quote Scripture to ourselves. We are not going to run to our Bibles or google to find the address of the verse that is coming to mind. We are going to go to Jesus directly. Talk to Him. And let Him talk to us until HE calms us back down, until HE gives us the word HE wants us to know, until HE lifts us out of the slimy pit and puts our feet back on the rock.

I am not saying we aren't going to read our Bibles at all. That would be crazy talk. I am saying we are not going to run to them and keep them elevated to the special place we have given them as the unspoken fourth part of the trinity.

For those of us who might be thinking, I don't do that. Fantastic. If that's not your thing, run to Jesus anyway instead of the fridge, the phone, or facebook. All three of those are subtle substitutes we use when something rocks us and we don't want to deal with it.

I'd like to share with you the prayer I have been continually praying. It doesn't even come from the words of Jesus but it's about the most powerful prayer I have ever prayed.

I believe, help me overcome my unbelief.
Mark 9:24

I truly fear that we have given ourselves so much head knowledge that we have forgotten to believe what we know to be true. And every single time we run to the answer key, we reinforce this habit. Granted it might be just me. Maybe I am the only woman who does this. Maybe my faith is just that weak. But something tells me I'm not. If I wrote about over a year ago, and this pastor preached it in the middle of the US, I don't think I'm the only one. Maybe it's time to talk about it, own it, and let Jesus change it. But in order to change it, we have to do what He says and take it all to Him. Who knows, mabye in the process we will begin to discover the abundance of God we've been limiting without even realizing it. 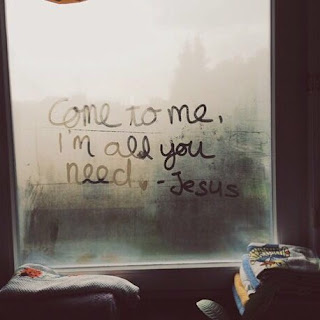 This picture is linked to one of my very favorite songs.
Come to Me by Bethel Music