I had it in me to destroy myself. I did. But Jesus wouldn’t give up on me. He’s stronger than any stronghold you’ve got, than any demons you’ve fought. You’ve just got to keep walking with him for days, weeks, months, years til all the sudden you realize somewhere old you died.
11:15 PM - 20 Feb 2018
A week ago this past Monday, I shared a post titled Anger, Comparison, and Joy  I talked a lot about being angry with God because someone I love is sick. It was good to get it all out because there is something incredibly freeing about acknowledging what is going on inside of you. Believe me, when James said that we are to confess our sins to one another to be healed, he knew full well what he was talking about.
But my story, or should I say God's story, didn't stop with that revelation.
A lot of us whether we want to or are willing to admit it, trust God NOT to let certain things happen. We put a lot of time and effort into preventing the one thing we are certain will kill us. It probably manifests itself in the form of control or manipulation. And what's interesting is that control and manipulation can be really subtle so that no one else knows, particuarly the one you are controlling and manipulating.
There were things in my now distant past that led to some pretty unhealthy beliefs. Because those lies were deeply planted into my heart and mind, they were displayed in my outward actions. In my case, I would do everything I could to put the odds in my favor so that what I wanted to happen would happen and therefore I could prevent other things from happening. I did this for a very long time.
And then my world crashed right around me. Because for all of my controlling patterns, I found out it didn't actually work. Go figure.
The result? Complete and total shutdown. Walls up, borders reinforced, and nothing was getting in or out.
See, once I was able to grasp that my anger towards God existed over my sick loved one last week, I stopped there. Then two days ago it literally felt like the heavens opened, the angels were singing, and God opened my eyes to an ever deeper reality.
"God will go to great lengths to squash a false gospel and repair
a cracked foundation in our faith." No More Faking Fine, p. 100
My cracked foundation was believing that God would never let that (what I was trying to prevent) happen. And when that did happen, it was all over for me. And so now I forced myself to ask the question I didn't really want the answer to....WHY?
So many of us truly believe that ignorance is bliss and that what we don't know can't hurt us. And in some cases that is true. What's faulty is our logic. Sometimes ignorance and not knowing is God's provision because it either isn't the right time to know or it's His grace because we actually don't need to know. And if/when He decides it's time to clue us in, we don't like it.
Believe me, I was happy living in denial. Really happy. But with revelation over a L-O-N-G period of time, a lot of wrestling with information, a series of difficult and painful conversations, and the quote above I learned something. Drumroll please......God will smash every idol in our lives until only He sits on the throne. Shocking I know.
My false gospel was rooted in the knowledge that God knew my past and He would surely never crash it into my present. Except He did and I didn't know how to handle it. And for years I didn't. To be honest, I didn't get serious about getting better and really dealing with it until about 18 months ago. Sadly it all started in late 2010. I guess you could say I was dragging my feet. I was operating under the assumption that if God wouldn't stop it, there was no telling what was up next and I wanted no part of it.
So I masked, put band-aids on deep gashes, and told myself repeatedly that all was forgiven and everything was okay. And I believed it because I said it enough. But the truth is we could tell ourselves the sky is green enough times to believe it, but that still wouldn't make it true.
But God is good. And He doesn't just stop when we finally get it. Once He puts things back in proper order, He has this uncanny way of taking what was good and then with our new, corrected perspective, makes it even better than it was before when we were the ones supposedly controlling it. How 'bout that?
But just like that Beth Moore tweet says, I too had it in me to destroy myself, but Jesus wouldn't let me. He has chased me down repeatedly over this entire ordeal. I mean, if we want evidence of the long-suffering nature of God, the past seven and a half years should be enough to declare Him patient.
I don't know what Why questions we might have for God today or in the future, but I can say this: if we take them to Him, when the time is right and He knows we are ready, He will answer them. He is stronger than any stronghold or demon and His goal is to get us to die to ourselves so that in Him we might truly live. 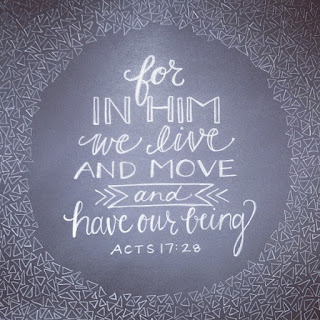