According to the Merriam Webster student dictionary, a response is a reaction of a living thing to a stimulus. For better or worse, it's what we do when something provokes us.

I would be willing to bet that most of us, if not all of us, have responded in a way we wish we hadn't in a given situation. Most of the time this happens when we receive ALL of the information AFTER we have already acted like a real jerk and then realize if we had just waited we (hopefully) would have chosen a different behavior or words. I'm convinced this is why Ephesians 4:26 is included in the Bible. In your anger, do not sin.

Granted, there are times that our reactions would have been exactly the same. We might still not have chosen the high road. But the reality is, everytime we don't choose the better path we pay a price. We might harm a relationship, we might lose the respect of others, or we might damage our own hearts. Regardless of what our less than stellar response might be, there is always a cost associated with it.

But what about the times that our behavior might be justified? What if our response is warranted based on what is eliciting it? What then?

As much as I hate to say it, as hard as it is to accept, there is still a cost and I'm afraid the price is much higher, much more precious, and not something we should so willingly surrender to pay.

Exodus 32 is the account of the golden calf that Aaron made at the request of the Israelites because Moses delayed in coming down from the mountain and the people said we don't know what has happened to him. (Exodus 32:1 CSB) The people were so desperate for something to cling to they asked for a god instead of crying out to God. It's sad until you realize how often we do the same thing, but that's not the point.

While Moses was with God, the LORD  realized what was going on and said He was going to destroy the people. Moses intercedes on their behalf, appealing to the LORD and His promises and then descends the mountain with the two stone tablets God had given him. And what happened? As he approached the camp and saw the calf and the dancing, Moses became enraged and threw the tablets out of his hands, smashing them at the base of the mountain. (Exodus 32:19)

Could he have asked why? Yes. Did he? No. He saw, he got ticked, and he threw the tablets.

As a teacher, my first inclination would be that he could have taken the tablets and shown them that God Himself wrote on them. That He cared enough to send a personalized gift with instruction that He'd already given. But no, he smashed them in anger.

So what was the cost....what did Moses ultimately pay with for his angry outburst? Proof. Actual, tangible proof that he had just spent forty days with the presence of God on top of a mountain. Yes, he would get another set of stone tablets, but those tablets would also become a reminder of the ones he lost, the original ones that came from a personalized retreat.

So here's my question: how often do we do the exact same thing?

How many of us have our morning quiet time with the LORD, to be filled with His Word and presence, only to lose every ounce of peace we were given within moments of human contact with people we either carried or married? You don't have to answer that. I'm pretty sure most of our answers are similar.

And just to point out the reality of this.....here I am writing, it's 5:28 AM on a morning we knew heading into that we had a two hour delay (so far) and I just looked at the man-child who emerged from his slumber and asked him why he was up. I did not say good morning, I did not ask if he wanted his coffee, I asked him why he was up. Perhaps instead I should be thankful and grateful that he is my baby, he is still home, and he is able to move and give me a good morning kiss. Just sayin'.

In John 14:27 Jesus tells us that He gives us His peace. We have it. It is ours. So if that's the case, why do we so willingly give it away? Do we really forget that easily that God knows exactly what is coming and that He's planned for it? Are we really putting the lifted countenance God gives us after spending time with Him on the altar to sacrifice so haphazardly?

It's not easy to keep our responses in check all the time. Our flesh will always fight us with knee jerk reactions. But as we grow in Christ-likeness, our reflexes can improve and our spiritual muscles can get stronger. Let's stop giving up the peace we've been given. It's a gift straight from Jesus and it's meant to be treasured not sacrificed. 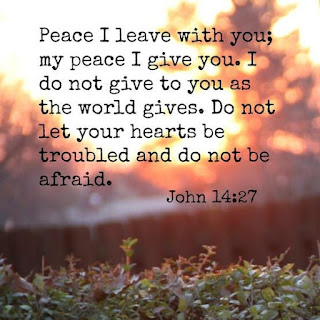