Last Friday when I came home from Bible study, I wrote the beginning part of this post. That entire post is in bold type. When I woke up Saturday morning, I read title alone of my devotional for the day and something clicked. That part is in italics. This is a little bit longer of a post because I believe there is a great divide between anger and joy and over it is the word comparison.

For a little while now I have known that I have had some unresolved anger issues. Not that I would violently or verbally lash out, but my fuse has been short for some time and I can snap pretty quickly. It mainly manifests as sarcasm and looking at others like they should know exactly what to do, what I mean, or what I expect.

After watching The Shack and listening to the sermon I posted last week, I realized something about my anger. But first, I need to establish some context.

In February of 2008, I had a minor accident involving a deer. It ended up totalling our car. I truly believe at that time the stress from the situation set off a chain reaction in my body that ultimately manifested itself physically in the form of joint pain, antibodies being created that were trying to destroy my liver, extreme exhaustion, hairloss, and outrageous amounts of fatigue.

I was seeing my regular doctor and a hematologist. I was being prepared for the possibility of a bone marrow biopsy when I was ultimately diagnosed with systemic lupus. After several months of medication, I started to get better. Like really better. And I stayed that way for a long time.

Then this past August my lupus activity number shot way up. No reason that I could think of caused this. It just happened. And so I had to restart the one medication I didn't particularly like. Except this time while I had no organ involvement, the number wasn't really going down and my symptoms have persisted. (exhaustion and joint pain, now including my jaw) But I still have to take the pill. And in my mind, if my organs do get involved and the pill isn't making the number go down as it is, then there is little reason to hope it will protect my organs at all.

I know some of you are thinking you can't think like that. But let me say this: you don't swallow all the pills, you don't feel the pain, and you don't live knowing the potential reality.

Enter The Shack. The place where everything that was good was stripped away without your consent and without warning.

But see my shack has two rooms. I don't live there alone.

A few years ago, someone I love very much also got sick unexpectedly. And no doctor, no medicine, no nothing has been able to help her. She was fine just like I was fine. And then she wasn't, and still isn't. I got better for a while, but she never has.

And so I question.

For years I went to my Bible and pulled out the verse I needed to get through the day. I claimed promises that I wanted to be true not the specific ones given to me. And while it's easy to say God works things out for good, she is still sick. That's what I see.

And yes, I know He sees more than me. But that's all I have right now is knowledge. Knowledge and anger. What I know to be true is in no way lining up with what I see and frankly it makes it hard to believe.

And when I see her pain, and when I hear her pain, I am left with Mack's question:

How can I believe you will take care of me when you aren't taking care of her?

What I didn't know until now is that my deep rooted anger, anger that I thought had a root I unearthed and treated with the truth, was not where it all stemmed. Not by far. My anger is rooted in the pain she still feels, the healing she has not received, and the fear that it won't ever get better.

But that's okay. Because even though it's hard to believe, that doesn't make it in any way less true.

Right now I have a battle to fight. I have to pray for my unbelief to turn into belief. And I can't make that happen. Only God can.

I can fuel it with His Word and I can listen for His voice, but He has to work this out in my heart and mind. I simply can not fix this by myself.

When you don't know what you are fighting, it's easy to grab the wrong weapon. When you don't know what illness is taking a toll on your heart and mind, it's easy to take the wrong medicine. But when you know, you can lawyer up. You can call on the advocate and ask Him to help. When you know, you can call the right doctor. And when you start to fight the proper way, you know you will win. It might get bloody, it will probably cause some brusing, and there will likely be scars that remain. But when the victory is won, it all ends up worth it.

I would have never guessed in a million years that my anger was rooted in not trusting God. I think I told myself so many times I did, not realizing that the words were falling flat because there was no faith in them.

But God is, above all things, patient. And He is more than willing to let us realize what is wrong when He knows we are ready to see it and work through it.

I shared last Friday that my brave prayer has been I beleive, help me overcome my unbelief. I don't know how long I will have to pray those words. Maybe until the day I see Jesus face to face and my faith really does become sight. But even if that's the case, every time I say them, I know He will be listening. And for right now, that's the first thing I am choosing to believe.

This morning I woke up and read the title of my devotional for the day: Stop the Comparison Game.

I know what you're thinking. The same thing we always think. Don't compare kids, marriages, jobs, callings, friendships, money, assets, blah, blah, blah because if you do, you will never be content with what you have always envying what you wish you for.

Ya know, the Bible doesn't say 'comparison is the thief of joy,' Teddy Roosevelt said that. But the Bible does say that we will be tempted when our own evil desires lead us to a place we don't want to go (James 1:14) and that Satan comes to steal, kill, and destroy. (John 10:10)

Confused? You won't be.

I did not realize until I could see, acknowledge, and own my anger towards God that it was rooted in what was taken away....my health and the health of someone I love dearly. It wasn't until I read the title of the devotional that I could understand that the poison that has been slowly killing me is comparison. What our lives were as opposed to what they are now.

The enemy is so damn subtle. Comparison can not just be about what 'others' have, which is typically how we see it. It also has to include what we did have, that we thought was either good or better, and wanting it back. Comparing our health, our job, our abilities, our friendships, whatever 'was' that no longer 'is.'

But once we see this, that the issue itself is self-comparison, we can also hear and understand the words of Jesus in John 15. You know, the ones about God pruning, because He also prunes the branch that does produce fruit so that it will produce more fruit. And that means even sometimes the 'good' has to go so that the 'best' can come.

So here's the thing. If we are looking forward to the day our kids are grown so we can.........(whatever), we are also comparing our current life with the life we did have when we could do whatever, pre-kids. If we are looking forward to the new job, the new assignment, the new car, the new house, because what we did have had to change temporarily because our circumstances changed, we are still comparing our current life with our old life. Or as is my case, when you are living in The Shack (which should probably read shackles) because you want the health you did have back instead of the one that needs to be sustained by God and maintained by meds, you are comparing your current life with your old life.

As much as it surprises me to say this.....I wouldn't want to go back to the time before I got sick if it meant I had to give up all that God has shown me and grown in me through this process. Yes, I would like my strength back. I would love to not have the thin spots in my hair, and it would be nice to run again. But if it meant sacrificing all the ways I've clung to my Bible, even as an idol because I still learned a thing or two, it simply wouldn't be worth it.

So how about that.....even when we use what God has given us, His Word, in an unholy fashion, He still manages to show us grace in that it still accomplishes the purposes for which He sent it. I suppose if nothing else, that does make Him really, really good, and gives me the strength to say .even if not, I still will. I've got a long road to walk on dealing with the anger that I've been holding on to for so long, but I'm not walking alone and I won't be in the fire alone either. 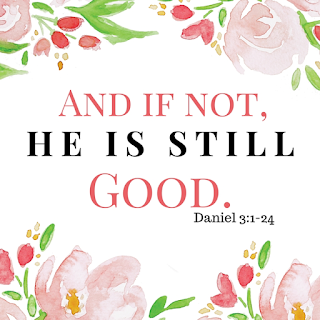 Picture is linked to Even If by MercyMe
at February 12, 2018