If you were to have company over and give them a tour of your home, what would you show them?  Would you focus on the things you have accumulated of your own accord, the gifts you've been given by others, or maybe the things that were unexpected?  Whatever you show is an indication of what's in your heart, and what you expect from your audience is a litmus test for your soul.

Hezekiah has some colleagues show up and he shows them his storehouses filled with silver, gold, spices, and olive oil.  To me that would be the equivalent of whipping out a bank statement, a portfolio snapshot of a 401K, and opening the fridge.  Why you would do that is beyond me and I imagine would be somewhat off~putting to your guests.

Granted we all have "things" we are thrilled about.  The questions we need to ask ourselves is why they make us so happy and what they represent to us.  I was not at Hezekiah's palace that day to know what his demeanor was while showing his visitors around.  But knowing they came because he had been sick and was healed, I would like to think that he was still recovering and perhaps would have been a little more humble than he appears in this narrative.  What makes it worse is that afterwards Isaiah prophecies the Babylonian exile and he thinks that will be a good thing because it will equate to peace and security in his lifetime.  I am not the wisest person on earth by far, but I do know enough to understand that peace and security will never come from a change in circumstances.  Peace and security only come from hope in an unchageable God.

There's a part of me that wants to believe that it at least occurred to Hezekiah to show his guests the letter from Sennacherib, the one he prayed over, the one that God gave him victory over.  I would like to think he showed them the wall he was facing when he found out he was going to die only to be given a second chance at life after declaring that God should do what is good in His eyes.  But sadly I don't think either of these things crossed his mind.

The world today places so much emphasis on what we own.  And even though we know we can't take it with us, there is still a part of us that searches for significance in our possessions.  I pray that we would take to heart the words of Jesus when He told us to store up treasures in heaven where moth and rust cannot destroy and thieves cannot break in and steal because the things of this world can never define our value no matter how much they are worth.

Father, the greatest treasures we have are your love and faithfulness.  I pray that we would display those things first and foremost.  Keep our eyes fixed steadily on the gifts of your grace and mercy knowing that they are the things that will last forever.  Remove from our hearts anything that we connect to our identity that is not of You and remind us that our peace and security are found in the knowledge that you are the same yesterday, today, and forever.  Amen. 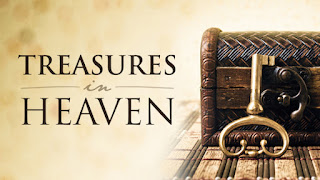