Healing for the Soul

When you're little and going to church you are taught the mechanics of what you are supposed to do.  For lack of a better way to describe it, the steps of the process, or the instructions on completing the task.  But as you get older, without a deeper understanding of the meaning of the action, chances are it's going to get set off to the side, ignored, and covered in dust.  At some point it may be cleaned up and used again, but truthfully, it will never be effective as a spiritual discipline until you experience the reality of its use.

Many years ago, there were things from my past that seemed to be lurking in the dark corners of every room I entered.  I never wanted to deal with them and so I didn't.  But they started to take a toll and the price they were collecting was far greater than I was willing to pay.  So, I did the only logical thing I could do.  I called them out into the light, talked about them, and subsequently diminished their power over me.  It wasn't easy because it required me to be incredibly vulnerable and I haven't done vulnerable well for a number of years.  After this, I clammed right back up.  Not because it didn't go well, it actually went better than I had anticipated.  I just, at the time, couldn't live without my well fortified walls.

But recently I have had to confront some other experiences that have been popping up in all the wrong places.  And through reading I discoverd I had a bitter root that was planted deep in my heart that I didn't even know was there.  No one was more shocked than I was to discover it.  Not only was it going unnoticed, but through the lies I had been telling myself for quite some time, I had been fertilizing, watering, and feeding this thing.  Unfortunately, when you know something is where it shouldn't be, you have to do something about it.  Especially if the potential consequences are way higher than you are willing to pay if you let it continue.

What's so funny, and I use that word very loosely, is that to get rid of it, I had to confess it.  But not to God.  No, I had to confess it to the person it was going to choke, even if only in my mind.  Because this weed was altering my perception of everything, I had no choice but to be vulnerable about where I was, the fact that I had misconstrued facts, apologize for not believing the best in and about the person involved, and take ownership of the manifestations of the negative thoughts.  This wasn't going to be an easy task by any stretch because, again, I don't do vulnerable well.  But the price tag for not?  Not an option.

James 5:16  says:  Therefore confess your sins to each other and pray for each other so that you may be healed.  The prayer of a righteous person is powerful and effective.

Growing up and going to confession meant little if anything.  I went in with a checklist of my offenses, repeated the same things every time, and left feeling no different than I did when I went in.  But as an adult I now have a better understanding of the magnitude of releasing the things that are keeping me bound.  The significance of this verse however is that we are to confess our sins to each other.  If we confess it to the person it directly involves, we can immediately receive their forgiveness and have our misconceptions and faulty perceptions corrected with the truth.  This is not only going to bring healing, but also a level of intimacy in relationships that is multiplied because it brings depth and breadth.

As the deconstruction of the walls I have built up continues, I can honestly say that the rewards I am reaping are more than I would have considered possible.  But I suppose that's just how God works.  In His economy the humble are exalted, confession brings healing, and grace flows from the grace you have received.  I don't know if I'll ever do vulnerable well, but I do know I want to do it more often.

Lord, the blessings you give to those who do things Your way are beyond comprehension.  They may not always be easy, but with Your strength they are possible.  Thank you for loving us enough to search our hearts, test our anxious thoughts, and reveal to us what you already know is keeping us as prisoners in cells we've created.  You never want us to live bound to anything but You.  We praise You for the words of truth that set us free and the restoration of what was lost but found again.  In Jesus name, amen. 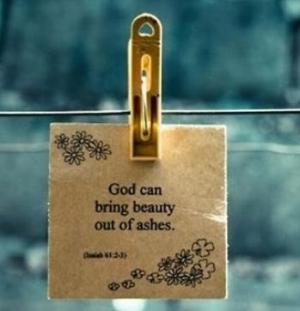