Yesterday I had my annual checkup with my opthamologist.  This is probably my least favorite appointment of the year because I have to have my eyes dilated.  The drops sting, the wait time is usually long, and it never fails to snow.  In case you haven't experienced dilation, sunlight, in any amount, glistening off of white snow is awful when your eyes are compromised.  And most annoying is that huge pupils look creepy.

Last year when I went, I was in the third book of a four book series and I was desperate to read.  After I got home, I forced myself to struggle through pages, holding the book at a distance and odd angles, just so I could make out the words enough to continue my obsessive need to find out what was coming next.  It wasn't easy, but I did it. (#TwilightEclipse)

Yesterday, being more impatient than last year, I took a book with me, determined to read while I waited to be seen.  That proved to be more difficult but not impossible.  It helps if you are stubborn and determined.  (#TheBrokenWay)

As my eyes later began to return to their normal state and reading wasn't a challenge, it made me appreciate my vision in a way I hadn't before.  It's something I take for granted so often, not thinking that something will ever permanently effect my ability to see.  But the days are unpredictable and we never know what is coming around the bend.

When I read my Bible this morning, I thought of the words of Amazing Grace ~ I was blind but now I see.  Every time God reveals a truth about Himself, His character, His ways, or our hearts, it's an opportunity to have the blinders removed and our vision restored.  Those personal revelations should be met with the same thankfulness I had yesterday when I didn't have to struggle to read the pages of my book but they often aren't.  They may make my heart leap in the moment, but soon after they are forgotten, misplaced, uprooted.  Why is that?

I have read books meant to help me with my faith journey.  As I was in the midst of them, the words were powerful, having an impact, and producing fruit.  But once they were finished, the message was lost, the lessons forgotten, and the truths diminished.  How does it happen that you go from blind, the ability to see, and blind again so quickly?

What I'm beginning to realize is that the messages, lessons, and truths aren't really as lost as I was before I was found.  They are there in my heart.  I am just expecting miraculous conversion after miraculous conversion.  And while God is certainly capable of doing that, for the most part, the differences in my life before and after Christ entered my heart, isn't a series of spectacular firework displays.  It's the slow, steady movement of growth, imperfect progress, and increased dependence on Him for everything.

One of my favorite verses for years has been 1 Corinthians 3:7 ~ So neither the one who plants or the one who waters is anything, but only God, who makes things grow.  I have always had a tendancy to try to make my garden grow.  Sometimes I think I get myself involved in online Bible studies, my own stack of books, and every other resource I can get my hands on as my own personal Miracle Grow supplement.  But the lasting changes that God desires for me aren't the ones that happen over night and quickly, but the ones that happen over time that allow me to realize I don't ever want to go back.

It would seem that God is sublty reminding me that slowing down, enjoying the process, and just resting in Him is a good idea.  I don't want to get so caught up in getting wherever I am going that I miss the beauty of where I am now.  He has me here right now for a reason.  Maybe it's time I focus on the truth that I've been put here for such a time as this and not for a time to come.

Jesus, you came when it was Your time.  You put me here because this is my time.  Keep my eyes fixed on You in where I am now not to where I hope to be someday.  Remind me that my vision is limited and that what you have planned is exceedingly, abundantly more than I could ever ask or imagine.  In Your precious name, amen. 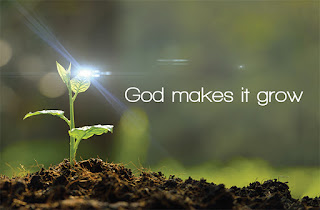