In a few short months school will end, the pool will re-open, and the days of lounging in a chair reading a book will return.  Summer has become my time of restoration.  There are few things that need to be done, the alarm is not set, and a sense of calm just washes over me without homework, projects, practices, and due dates looming on the calendar.  Last summer I embraced that for all it was worth, and I must say, it was the best summer of my life and I had two surgeries.

Going to the pool only requires packing the cooler for the hours we will be there and filling the pitchers and bottles with the water we will need to drink while there.  I generally over pack water because there is nothing worse than being thirsty.  Thirst isn't like hunger that can be ignored or forgotten by activity.  I typically don't forget to eat, but if I'm distracted and motivated enough to complete something, I'll certainly put it off.  But thirst, no.  Thirst demands to be quenched and will stop you dead in your tracks until it is.

When Jesus was on His way back to Galilee, He had to go through Samaria.  While Jews generally avoided the area because Samaritans and Jews didn't mingle, He knew that someone was there He had to talk to, a woman whose name we do not know.

When she comes to draw her water at an atypical time of day, Jesus is there waiting for her and asks her for a drink.  She is surprised he asked her and says as much.  He tells her that if she knew who was talking that she would have asked Him for a drink and then she says something that I find very interesting.  She replies with, "Sir, You have nothing to draw with and the well is deep."

Now, I am not a theologian by any stretch.  I am just one hot mess of a woman that is desperate to see Jesus do some pretty significant miracles in my life.  I think that's maybe why I identified with her story so much this morning.  It's not like this is the first time I've read it by any stretch and considering I'm only 42, I'd venture to say it won't be the last either.  But her words, they echo.  She proclaims that He has nothing to draw with and the well is deep.

Metaphorically speaking, let's just say this well is her heart.  What would make a heart seem deep? Intense pain?  Significant loss?  Emptiness desperate to be filled?  Failed attempts to fill?  A desire to be accepted only to be rejected again?

Her conclusion that He has nothing to draw with is logical if He's sitting there without a bucket or jar to fill.  So her curiosity must have been peaked when He even insinuated He could give her water. But what He did give her through their brief exchange was so very much more.

~Jesus gave her knowledge.  He knew who she was and that was probably a bit much to take.  Because not only did He know her story, He wanted to spend time with her despite her story.  It was not enough to make Him stay away or talk behind her back.

~Jesus gave her understanding.  If He was talking to her, knowing the things she'd done, He clearly could convey with His eyes that He understood the motivations behind her actions.  She was, as so many of us have, looking for love in all the wrong places.  And that was not enough to repel Him. She'd likely never known that was even possible.

~Jesus gave her compassion.  More than anything, He wants to give her what she needs: living water. Water that will satisfy her thirst and stop it from coming back or creating a desire to satisfy it any other way.

~Jesus gave her mercy.  He isn't judging or condemning her for what she's done, He's offering her a way out for the future.

~Jesus gave her grace.  He wants to give her what she thinks she doesn't deserve.  Even in her statement that when Messiah comes He will explain worship, she is expressing that she is looking for a way out and just needs the steps to follow to make it all right again.  But He is offering it, right there, right then.

He might not have had a jar or a bucket, but He had plenty to draw deeply into the well of her heart. There are more times than I would like to admit that sometimes you just want someone to look into your eyes, and without saying a word, let you know they understand.  But the reality is, human flesh and blood can not do that for us.  It can only be through the love of Jesus and His eyes boring deeply into the heart and soul He creaeted that can become a reality.  We are all that woman at the well.  We desperately want someone that knows us, understands us, has compassion on us, gives us mercy, and wants to bless us with grace on top of grace.  And all we need to do is meet Him where we think we are most invisible, most vulnerable, most subject to judgment, because it will always be in our deepest need that He meets us.

Jesus we know that You are all we will ever need.  Help us to desire you the way you desire us. Satisfy our deepest thirst with the living water you give so that we can live our lives fully for you. Amen 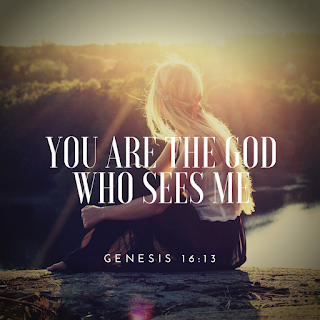