"Now, I am not going to reduce prayer to a formula. That seems like an inherently
bad idea. But I do think it's important to realize the characteristics of the prayers lifted
by some pretty significant people that God used in unbelievable ways."

Growing up I was taught how to pray. There was an order to the words, they were to be memorized, and they were to be spoken. And that's the way I prayed for years because it was all I knew. I remember a time in high school that I went to a youth group meeting where a boy I knew prayed out loud spontaneously. I won't lie, it FREAKED.ME.OUT. I had no context for what was happening and the level of my discomfort was profound.

When I started to attend a non-denominational church, I didn't receive a context on how to re-frame the concept of prayer. As a matter of fact, I'm pretty sure my 'introduction' to prayer came from listening to Beth Moore on Life Today because she would pray before and after she taught. And while her prayers always spoke to my heart, I didn't know 'how' she did it. But knowing her love of Scripture, I suppose I figured it would come naturally with reading my Bible.

After God revealed to me this summer how I had essentially made my Bible an idol, I lost all context for prayer. It's not that I never prayed, I just don't think I really understood the 'what' of what I was doing when I prayed and the fact that God was listening. In hindsight it seems that I thought I was sending out an email that God would get when He checked His inbox, not that He was paying attention when I spoke, because my prayers amounted to claiming His promises, not actually talking to Him.

But His great love that would not let me stay 'stuck' where I was, the love that waited until I was ready for the reality of my condition, put me in Daniel 9 this morning as part of the reading plan I am following. Granted, each translation of the Bible has different 'titles' for the chapters but my NIV Leadership Bible, it's called Daniel's prayer.

And so, I read it all first. Then I went back and broke it down into what made up his prayer. I figured if Daniel's prayer made it in to Scripture, than perhaps, somewhere within it, is the connection I desperately need to make. This is what I found:

~When Daniel prayed, he knew what Scripture said and then he went to God in prayer about what was going on.
~He acknowledged who God was, what He had said, and His character and attributes.
~He admitted the sins that had been committed.
~He laid it out what He wanted God to do.
~He made his plea based on God's glory, reputation, the sake of His Name, and His fame NOT on the level of discomfort (selfish ambition or vain conceit) that he or the people were feeling.
~He asked for what he wanted so that God's power could be displayed and His majesty might increase.

Now, I am not going to reduce prayer to a formula. That seems like an inherently bad idea. But I do think it's important to realize the characteristics of the prayers lifted by some pretty significant people that God used in unbelievable ways.

As I said earlier, my 'prayers' were nothing more than claiming Scripture over things I wanted changed. They had very little to do with actually seeking God Himself or talking to Him. They were my list of expectations based on what His Word clearly said with the understanding that if He didn't answer them, it wasn't His will. I didn't talk to Him, I reminded Him of what He promised and left it at that. I don't know if this was based on fear of what He might say, a feeling of unworthiness to be heard, a belief that I didn't deserve to have what I felt I needed, or if truly expressing myself would leave me open and vulnerable with my emotions on display thinking that I would be told to 'suck it up buttercup.'

Slowly but surely as I had started praying with more intentionality before He even revealed to me the problem, it appears that His grace was laying a foundation to understand where the problem was. I am not anywhere close to where I want to be in my prayer life, but I am more than willing to let Him set the pace so that it can be built up the way He intended it to be all along.

Lord, I desperately need You. You know me, You know my thoughts, You know which things need re-wired because I have looked at them the wrong way. Help me come to You, to lay it all out, and believe that You not only hear me, but that You are listening to me. Thank You for helping me to understand where I have gotten this prayer thing wrong so that You can set it right. I love you. Amen 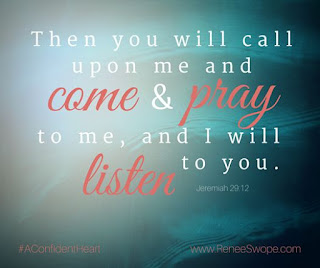