I am not a theologian. I am just a girl who loves Jesus and wants to do thinigs His way. I am not in seminary, unless you count my dining room table as a classroom. This morning, I read something that has ruined me and I need to share it because if I don't, I'm afraid I might truly explode.

Luke 9:23-25 Then He said to them all: "Whoever wants to be my disciple must deny themselves and take up their cross daily and follow Me. For whoever wants to save their life will lose it, but whoever loses their life for Me will save it. What good is it for someone to gain the whole world, and yet lose or forfeit their very self?"

When Jesus went to the cross, He took with Him our sins and shame. He destroyed them once and for all. But we don't live like we believe that. Not by a long shot.

So much of the time we spend our lives trying to make up for what we do. We hold on to our guilt because we are convinced we don't deserve His grace.

In The Broken Way, Ann Voskamp quotes Martin Luther with this:

By the wedding ring of faith, He shares in the sins, death, and pains of hell which are His
bride's. As a matter of fact, {Christ} makes {our sins} His own. Here this rich and divine
bridegroom Christ marries this poor, wicked harlot, redeems her from all her evil, and adorns
her with all His goodness. Her sins cannot now destroy her, since they are laid upon Christ and
swallowed up by Him.

From such a marriage, as St. Paul says, it follows that Christ and the soul become one body -
so that they hold all things in common whether for better or worse. This means that what Christ
possesses belongs to the believing soul, and what the soul possesses belongs to Christ...Christ
possesses all good things and holiness; these now belong to the soul. The soul possesses lots of
vices and sin; these now belong to Christ.....Christ, the rich, noble, and holy bridegroom, takes
in marriage this poor, contemptible, and sinful little prostitute, takes away all her evil, and bestows
all His goodness upon her! It is no longer possible for sin to overwhelm her, for she is now found
in Christ.

When I read the verses in Luke, I thought about what it means to pick up my cross. Or at least the way I've always assumed it to be. But what if I've looked at it the wrong way? What if there is something much greater, much more beautiful than I ever dared to think?

When I read about trying to save my life, I don't see it the same anymore. I don't think about it as trying to hold on to control, I think about it now as in denying what He did and trying to do it for myself. And if that's so, then losing my life for Him is truly accepting what He did and believing that it was enough. That there isn't something for me to do but live my life for Him freely in worship, service, and deep, gut level thanksgiving.

So then what is the weight? Why is it so difficult to pick up that cross? I believe it's because the weight of His righteousness, His grace, His mercy, His compassion, His forgiveness, and His glory are what's left after the resurrection and it is too much for me to bear. Too much in my mind and too much in my heart. How do you deal with that when you look in the mirror and see yourself reflecting back and not the one that joined Himself to you when He drank that cup and offered it to you?

I don't understand how I am supposed to be okay with what He did for me. I don't know how I am supposed to believe that I don't ever have to be enough in my own eyes because I am already enough in His. But I do know that He will show me and I do know that He loves me enough to help me. And so as I sit here trembling under the weight that He is asking me to share with the world, the weight of His righteousness, grace, mercy, compassion, forgiveness, and glory, I will feebly attempt to pick up the cross and believe that just as I am His, He is mine. And I will tell everyone what He's done for me. 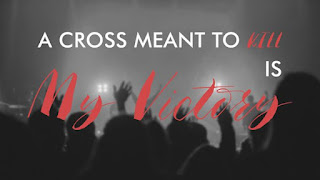