"For as self-aware as I am, I also have a tendency to be very distracted
and unfocused. I can tell you what I think is wrong with me,
but that doesn't necessarily motivate me to immediate action."

A few months back I had someone tell me that I was very self aware. This wasn't something I didn't know but it was nice to have someone else recognize it. I don't see a point in ever adopting that 'fake it til you make it' attitude because that doesn't help anyone, especially me. But along with that awareness, comes an intense desire to deal with the stuff that isn't good, or at least what I think is different than it should be.

A couple days ago I watched an interview with an author I respect and she quoted Viktr Frankl in saying, "The root of anxiety is unfulfilled responsibility." She might as well have said, "Jenn, pay attention. I'm about to drop a truth bomb that is going to implode your current state of existance." After I picked my jaw up from the table and took the 1.2 seconds I needed to realize that what she said summed up my entire being, I knew that a few things that have happened in the past 6 months or so were no accident.

First, I read a blog post about a book called Emotionally Healthy Spirituality. I haven't finished the book yet (truthfully I need to restart it) but the premise is the disconnect we, or at least I, have with my emotions. I deal with things analytically and sytematically for the most part but leave how I feel about them out of the equation. This is not healthy in case you were wondering.

Second, somewhere, probably on facebook, I saw an advertisement for a book called No More Faking Fine. That might as well have had flashing arrows pointing to it. I don't 'fake fine' by any stretch of the imagination, but I also don't verbalize my 'not fine' to God in a healthy or productive way so that I can have my mind recaliberated to what I know is true. Instead I've developed a rather unhealthy habit of putting Christian platitudes on every thing and moving past it instead of allowing myself to feel the weight of it. As Ann Voskamp wrote in The Broken Way, "Pain demands to be felt or demands you feel nothing at all." I've done this one so well that I haven't had a gut wrenching cry in 6 years. #TrueStory

Third, in the "New" section of the library, I found a book called How's Your Soul by Judah Smith. While I've barely gotten past the introduction, I realized something very quickly in what I've read. My soul is not okay. At all.

For as self-aware as I am, I also have a tendency to be very distracted and unfocused. I can tell you what I think is wrong with me, but that doesn't necessarily motivate me to immediate action. Perhaps it's a way of delaying the discomfort I am certain to feel as I delve into these three books, or just outright procrastination. I should say that the first two I do own and have started them. I also put them back down and read something else that was a little bit safer.

But this morning, I read something in 1 Kings 8 that caught me off guard. As Solomon prayed for the temple dedication, he repeatedly petitioned God for the scenarios when the people would realize their faults and turn back to Him. As he goes through almost every possiblity, in verse 38 he prays, "and when a prayer or plea is made by anyone among your people Israel, being aware of the afflictions of their own hearts, and spreading out their hands towards this temple, (39) then hear from heaven, your dwelling place. Forgive and act; deal with everyone according to all they do, since You know their hearts."

A lot of my desire to "get better" was birthed from the realization that I don't want to die this way. I suppose you could call it a mid-life emotional crisis. But until I read Solomon's prayer over the Israelites, I don't think I was aware of the fact that I've been trying to fix myself. Don't get me wrong, God can use the words others have written to help me, but only He can do the fixing. I've systematically left Him out of the equation every time because I know that with Him, I can't ignore the pain that is bound to come because He's not going to let it go until I deal with it.

I can't say that I've had a hard life, but I've definitely gone through some unpleasant things. Thankfully God promises to use all of those things for my good. Not a single one of them is the one thing that God can't redeem and turn into a harvest of fruitfulness. And the best part is that with God it's never too late to start again.

Lord, I am sorry that I have delayed what You have been trying to accomplish. The consequences of my lack of follow through are evident. I know that I have avoided this in the hopes of sparing myself what is sure to be hard. But no matter how hard it is, I know that You will be with me, leading me every step of the way, making a way in the desert and streams in the wasteland. Your specialty has always been bringing things back to life and I'm ready for the resurrected King to completely resurrect me. Amen. 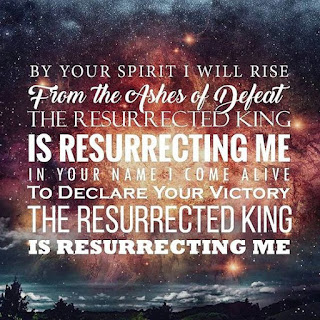