One of the medications often given to people with active lupus is imuran. Typically prescribed for transplant patients to stop organ rejection, this pill works to suppress the immune system so that it stops doing things it ought not to do. The best analogy of lupus I can give you is a two year old with a baseball bat in an antique shop allowed to run wild and do what it wants. You can only imagine the destruction that can be caused. They might hit a few collectible signed baseballs to get a base-hit, but they're also likely going to break things that shouldn't be touched with a wooden bat.

So when we think about the concept of obeying from our heart that pattern of teaching that has claimed our allegiance, we have to be really thankful for the promises of Ezekiel 36:26. 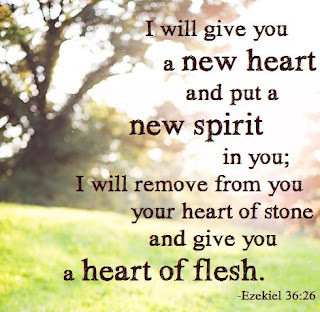 Unfortunately, we forget that we've been given a new heart and a new Spirit, that we were made a new creation (2 Corinthians 5:17), and we revert back to old habits.

When Nehemiah had finished his assignment in leading the rebuilding of the wall in Jerusalem, the wall was dedicted, everyone was on fire for the Lord and what they were supposed to do, and he went back to Babylon. After time, he went back to Jerusalem to check on things. And as you might suspect, it all went to hell in a hand-basket in his absense.

Why? Because like the rest of us, unattended we typically revert back to what we know or prefer.

While the cartoon image of an angel on one shoulder and the devil on the other isn't exactly Biblical, they wouldn't even do the work we need them to do to stop us from backsliding. Our greatest chance for success is being so in love with Jesus that we don't even have the desire or inclination to entertain doing anything that would hurt him.

But what does that look like as an anti-rejection drug?

We have to pray for ourselves. As selfish as it may sound, if we would pray for someone with an addiction to overcome it, we have to be willing to look at our habits as addictions that we desperately need to be released from. If we would do it for someone we love, shouldn't we at least love ourselves as much?

We need to keep our thoughts on what is excellent. Focusing on what we've been given, what we've seen God do, and where he's called us to action doesn't give us time to set our minds on anything other than what's above and what matters most.

We need to intentionally make time in God's word. As much as I am thrilled that you are reading this, if you aren't reading your Bible, I'd rather you put the few minutes you are spending here, there instead. Don't feast on my breadcrumbs, let God give you the meal he has prepared for you. Because this is the reality: when the Book of Moses (Deuteronomy) was read, the people found that it was written. (Nehemiah 13:1) If we don't know what our Bible says, we have no hope of doing what it says to do.

God has a pattern of teaching that is capable of claiming our allegiance. If we are obeying from our heart, the heart he has given us, things that once distracted and looked pretty begin to lose their appeal and at the same time, we begin to shine his glory and power to those around us. Let's not forfeit what he has for us because of our own forgetfulness. Instead, let's allow God to do a work in us that causes us to shout Thanks be to God that we are no longer slaves to sin.