When It Matters Most

Do not offer any part of yourself to sin as an instrument
of wickedness, but rather offer yourselves to God as those
who have been brought from death to life; and offer every
part of yourself to him as an istrument of righteousness.
Romans 6:13

I absolutely realize that we can not hold non-Christians (or who we hope are non-Christians.....you'll understand in a minute) to a Christian standard, so please consider this a cautionary tale.

Once upon a time there was a family who decided to travel to visit more family that lived at a distance. All was right with the world until the first morning they woke up. See, what no one knew was that in the middle of the night, a line had backed up causing an addition to what should be in the basement. And while the addition was not yet of epic proportion, clearly there were ramifications for all involved: No one could shower.

Concerned and mildly panicked, a phone number was retreived for the city to see find out if a disruption was being experienced by anyone else in the area. However, because of the early hour, it was possible that no one else knew yet that they too were expereincing a problem. And so, a phone call was placed to the professional that had handled all proactive maintenance work. Unfortunately, the number listed for the business was apparently also a residence and not an emergency line. And the ringing phone was not received with compassion for the caller at all. In fact, there was sarcasm, anger, bitterness, and a bit of rage.

Because our story is yet unresolved, it must sadly end here. But the lesson is just beginning.

When we think about all the parts of our body we can offer as an instrument of wickedness, the heart and our hands and feet are probably the most obvious. If we don't have godly motives to do something, doing it -whatever it is- probably isn't going to work out well for anyone. Additionally, our hands and feet are meant to be used to serve others and serve them well. Probably the best way I heard this described was from a commencement video circling facebook where Dr. Rick Rigsby said, "Your servants towel should be bigger than your ego." #Boom

From the story above, one would certainly hope that the person who answered the phone is not a Christian. And I don't mean because we wouldn't want them in eternity with the rest of us 'perfect people,' I mean because they clearly were not using their hands and feet as Jesus would. Can you imagine Jesus getting woken up in the middle of the night with someone panicked over an uncontrolled circumstance and he berates them for calling to early? Could you imagine him screaming and saying he wasn't available for several more hours? Last I checked when he fell asleep in the boat, he rebuked the wind and waves and ASKED the disciples why they had little faith not screamed at them for waking him up.

The fact is, the times we need to shine the light and love of Jesus and offer ourselves as instruments of righteousness are probably going to come at the absolute least times we feel like offering it. When the phone rings unexpectedly early (which clearly means something is wrong), when someone is rude in a store (which rarely has anything to do with us), or when someone goes bat-crap crazy on us over something rather unimportant (and likely means something is really wrong).

This week has been extremely convicting for me as I have thought a lot about the different ways I have certainly offered up parts of myself as an instrument of wickedness. My guess is some things have crossed your mind, too. But I pray we have also seen the grace of God through it. That we have looked back at past mistakes and seen growth over time. That we can take the lessons and move forward with the mind and attitude of Christ. And that more than anything, we actively choose to offer every part of ourselves as instruments of righteousness that wage war against all that threatens the peace and freedom Christ died to give us. We have been brought from death to live and it is our joy to make that evident. 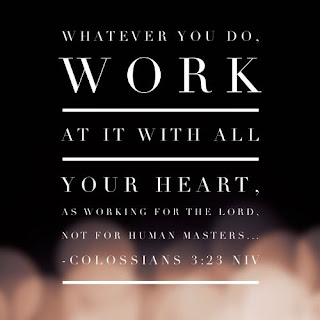