Several months ago I had an opportunity to meet with someone about a position I thought would be perfect for me. Not only did I submit my resume and get an interview, but I also had my references lined up and ready to go.

At the conclusion of the interview I pretty much knew it wasn't going to be a good fit, but my conclusion was based on conflicts within my circumstances that were going to make it difficult to commit to what was being asked. Either way, I wasn't offered the position and so I suppose they thought I wasn't a good fit either.

About a month after the interview I saw two people gossiping about another co-worker. At the time I silently thanked God in prayer that he clearly protected me from that environment.

A few months after I found out my man-child wanted to run cross-country. This would have made my schedule significantly more difficult, and so again, I thanked God in prayer that I wasn't offered the job.

Then, because I was not committed to anything else, I was in the position to help a friend. Again, thanked God.

But today, the ultimate icing was placed on top of this divine cake. I overheard a conversation because of my proximity to it and was never more thankful that I was not, and would not be, the intended receiver of the words being spoken.

What's so fitting is that today was the last week of the 5 week study Israel's Mission by Ray Vander Laan. At the end of each video, 1 Chronicles 16:8 has been displayed across the screen: Give praise to the Lord, proclaim his name; make known among the nations what he has done. And so that is what I am doing ~ I'm telling you.

We probably won't get a glimpse into the reasons behind each and every no we are given. But for the ones we do, the ones where we actually get to see his grace in not giving us what we wanted, maybe it would be wise to keep a record to remind us in the times we don't understand. God really does know what he's doing, we just need to remember that a little more often. 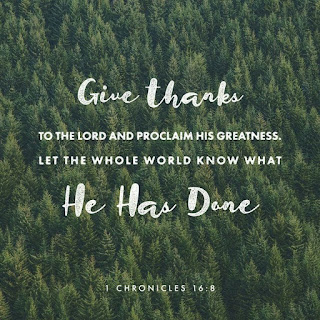