If You Don't Have Something Nice to Say

On Tuesday we learned that the word sin in the context of this verse has a self-originated nature, meaning, we instigate it. Ouch. And while any part of our body can be used as an instrument of wickedness, we probably think about our mouths first.

We covered gossip yesterday as one of the unwelcome roommates that takes up space in our lives from the perspective of our ears. And it's no shock that we could certainly go there with our mouths as well. But we all probably get that and so we're going somewhere else.

Now, we also learned on Tuesday that an instrument is something used to make war, and that all weapons (instruments) are given as resources to prevail against spiritual war. However, we can (and certainly do) use our mouths to wage a wicked war, one that goes against God's best rather than a godly war, one where we stand our ground against Satan and his schemes.

But we can't leave our mouths as a weapon only in the category of gossip. We have to include words that demean, belittle, complain, demoralize, embarrass, humiliate, etc.

~If we complain about something and it instigates complaints, dissatisfaction, or discontent in another person, we have used our mouth as an instrument of wickedness.

~If we belittle what somebody believes WITHOUT finding out why they believe what they believe through an honest and exploratory conversation, we belittle the person and our mouths become an instrument of wickedness. (Think of this when you meet someone with opposing, I don't know, politcal views. Not saying you have to agree, sway, or change sides, I'm just saying we need to at least seek to understand each other rather than beat each other to death with our words and name-calling.)

~If we embarrass someone through a public forum that can easily create feelings of shame and humiliation, we have used our words as an instrument of wickedness. While dog/cat shaming might be cute with signs that say what they did, our people are another story. And don't get me started on Well, ................ isn't on.............., you have still used your words to influence the opinions of others about someone you love. #SoapBox

Like all parts of our body, our mouths are to be used as an instrument of righteousness, which is beautifully evident in Colossians 3:16-17. 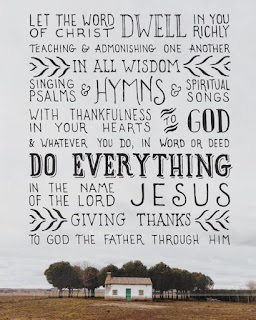 We learned as kids, and pass on to others, that words can't hurt us. But that's not true. They can and do. We hear things enough and we start to act out of what we have come to believe. This influences everyone, especially those who have, by circumstances, been subjected to situations they didn't have a positive influence to help them find their way out of. That's why the 'boot-straps' mentality doesn't work for everyone. If you have enough people telling you that you aren't good, are entitled, or anything else, why would you even try to fight to overcome their beliefs when you will just get pushed right back down. Just sayin'.

Our greatest hope is to take the truths that God says about us, speak them over ourselves until we believe them, and then speak them over others until they do, too. James warns us of the danger our mouths can do because our tongues are a restless evil full of deadly poison. But if we intentionally seek to align our hearts with God's and his truth, what will flow from our hearts is honey not vinegar. Let's purposefully use our words to build up, encourage, teach, inspire, motivate, pray, praise God, and tell all that he has done instead.

Lord, our mouths get us in so much trouble! And more often than not, we speak before we think and they so easily become an instrument of wickedness that wages war in our own hearts and the hearts of others. Help us to seek you before we speak, seek understanding before spouting assumptions, and use our words for your honor and glory. Don't let us forget that if we don't have anything nice to say, that we should just say nothing at all. 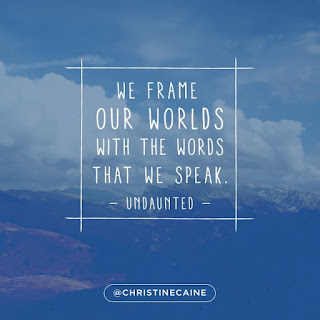