Over the past few months I've talked about the yoke that Jesus offers us and how I understand it now to be the decision to walk in the calling he has for us individually rather than going rogue and doing our own thing. I've also learned that the stress and anxiety we feel is often the result of grieving the spirit of God in us when we do go rogue ~the greater our resistance, the greater our angst. As you may rightfully conclude, this all has to do with the two words we like least: discipline and obedience.

The reality is, we don't want to make the choices we are supposed to make half the time and the other half we don't want to seek God long enough to hear what he has to say. Honestly we'd prefer a list of rules to follow so we don't have to think about it or put much effort into it, but the truth is we'd probably break most, if not all, of them.

But as I've been reading through Nehemiah, I read some scary things this morning that gave me a better perspective on just how bad this dilemma is.

Nehemiah 6:16 says, "When all our enemies heard about this, all the surrounding nations were afraid and lost their self-confidence, because they realized that this work had been done with the help of our God."

So, the wall is built, the work is done, and the people who don't believe in God are more afraid of God than we live our lives.

Oh, but wait! It gets better.

Nehemiah 7:2 says, "I put in charge of Jerusalem my brother Hanani, along with Hananiah the commander of the citadel, because he was a man of integrity and feared God more than most people do."

That should make us ready to jump out of our clothes and run for a burlap sack and an ash heap.

When I think about the reality of this in my own circumstances, there are a lot of things I know that need to change. But they haven't. And while I could give a list of valid reasons, they are nothing more than a pile of filthy excuses.

Don't get me wrong, I am not saying we should be cowering in a corner with a pillow to cover our eyes. I am however saying we don't have a proper fear of the Lord as is evidenced by our lack of follow through on things we know to do.

What's so disconcerting about this problem is that we have the solution.....the yoke Jesus offers. If we'd just seek first the kingdom and do what he tells us to do the first time, our stress level would go down, we'd probably sleep better at night, our witness would be stronger, God's glory would be blinding to those around us, and we'd be filled with more joy knowing we are doing exactly the right thing than we even realize is possible.

As I mulled over that verse in Nehemiah while I was taking the kids to school, I kept thinking about the end of Proverbs 31. Verse 30 says, "Charm is deceptive, and beauty is fleeting; but a woman who fears the Lord is to be praised." I have never gotten that verse. And while there is more depth than the little glimpse I got of it this morning, I now at least understand why she is to be praised. Because if she's not a raving lunatic taking her frustrations out on everyone around her that are nothing but a result of her lack of obedience and discipline, she is probably the most wonderful person in the world to be around. I couldn't even attempt to put on her shoes and that has nothing to do with the fact that I wear a 10 or an 11.

I don't know what it will take to get me or you to do what God tells us the first time. I don't know how hard it will be to start showing some self-discipline when it comes to what God has clearly declared over my life or yours. At the very least I want to be declared a woman who fears God more than most and I know I'm not there yet. But beyond that, I want to become a woman who fears the Lord and is to be praised. Because honestly, mediocrity and frustration with things that I know full well have the ability to be different but aren't because of my lack of fear, is getting really, really old. 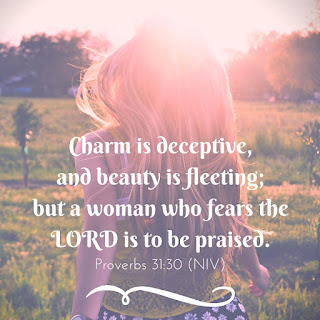