If you had asked me last week if I had fear in my life, I would have said no. When I think of fear, I think of being afraid and somehow differentiate it from other emotions. And then I read this:


"Fear is the root of anxiety, worry, control, anger, paranoia, shame, insecurity,
manipulation, intimidation, unbelief, isolation, inadequacy, apathy, addiction,
and people pleasing. Fear is rooted in self-preservation......Fear is a tool that
the devil custom designs for each of our lives because it is void of the love of
God. God is love (1 John 4:16), and when we fear, at our core, whether con-
sciously or subconsciously, we're partnering with a lie that we are cut off
from God's love." She is Free by Andi Andrew p.97-98

I can say without a doubt, now knowing that fear manifests itself in those ways, I live a great deal of my life in fear.

Now, at the end of the chapter, she asks you to write out your list of fears. That was fun. Not. But as I wrote them out, mostly simple phrases and key words, I realized very quickly that most of them centered around one concept and that my fears are evidence of extreme self-preservation which clearly indicates a lack of trust in God to sustain and care for me.

As depressing as this might all sound, I am actually thrilled that this happened. First, knowledge is power. When you realize you are doing something that was slipping under your radar (like believing a lie), you can then begin to combat it with the truth. Second, it coincides with the book that showed up in the mail last week that I wasn't expecting.

So what is the truth?

1 John 4:18 tells us There is no fear in love; instead, perfect love drives out fear, because fear involves punishment. So the one who fears is not complete in love. This truth, held in comparison to my list, showed me something significant. My fears are rooted in the belief that my choices are in direct proportion to consequences that are a punishment for doing things I feel guilty about. Consequences that have not even happened and that I have no evidence supporting that they will happen. Could they? Yes. But are they currently happening? No.

As the merry-go-round in my mind started spinning, I soon saw the beauty of this verse. Perfect love was demonstrated in the cross where Jesus took the punishment I deserve which is why there should be no fear in love. Furthermore, when I looked at my list again and realized what actions were behind this fear, I realized that I was reducing God to being punitive, judgemental, and full of vengence over things that are ridiculous and make Him out to be a tyrant.

Now, as the ride in my head was about to end, all I could hear were Paul's words echoing that nothing can separate us from the love of God. And that includes what I might see as less than stellar choices but in my heart know were God's direction because of the way He made me. But here's the real killer. If Paul who persecuted the early church and oversaw the murder of many, can say that nothing can separate us from the love of God, how can I even entertain the thought that I could manage to do the one thing that could separate me from His love? That is a level of pride and arrogance I did not know I was capable of.

I once read an acronym for fear that described it as False Evidence Appearing Real. The abilities God gave our minds were meant to think His thoughts, about things in heaven where our life is now hidden in Christ, and about His goodness and all the reasons He is worthy of our praise, not how our lives might become a call to endure what we fear the most and why we'll be to blame for it.

As this week is just beginning, let's make a decision to intentionally examine our thought life and surrender it to Christ. Let's be bold enough to ask ourselves the tough questions about any lies we might believe. And then let's confidently go to the throne of grace to seek God's wisdom and strength on the battle for our minds. He didn't give us a spirit of fear, He gave us His Spirit which has the power to overcome the thoughts that are leading us to death. 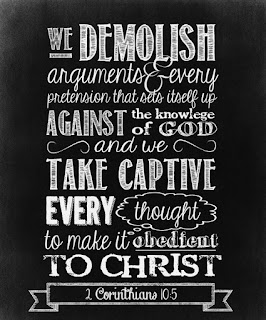