God's ability to redeem anything, included thoughts that have been a part of our lives for well over thirty years, is not beyond His capability. He can take any memory, correct it, redeem it, restore it, heal it, and remind you of what you should have known to be true all along but were never taught. And that is nothing short of incredible.

I am going to date myself significantly here so stick with me.

Growing up in the 80's, we had music that taught us a lot of lies about our worth and value and where it came from. And we also had a fashion trend that let us know if we belonged, if we were wanted, if we were worth pursuing. And if you had it, it was a badge of honor and a declaration of worth. And it meant everything. 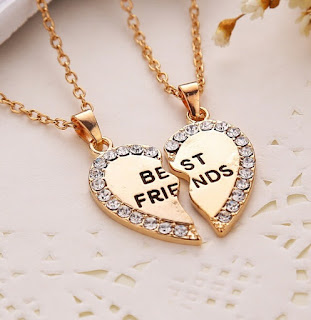 Don't lie. You either just got really sentimental or extremely nauseated.

My first memory of this necklace comes from 6th grade and desperately wanting to get one with the person I was closest to at the time. Didn't happen.

My second memory comes from 7th grade when she got it with someone else.
Person A bought it to give to Person B. Person B already had a set with Person C. Person B kept the 'new opposite half' to wear with Person A while Person C thought Person B was wearing the other half from 'their' set. Oh the drama.....and psychological damage. And me, being the typical hurt middle school girl....you know what I did. I told Person C. Why? Out of the goodness of my heart? Heavens no! My insecurity ran so deep, I thought my honesty would create a bond between us. Desperate to belong, be wanted, and be valued, much?

And then came high school with the boyfriend/girlfriend version of these horrid things. It's like the trauma was never going to end!

Here's where things get interesting. I don't know if the 'best friend' necklaces were created with the original intent of the boyfriend/girlfriend version or not, but, in case you forgot or like me didn't know, these necklaces have Biblical roots. 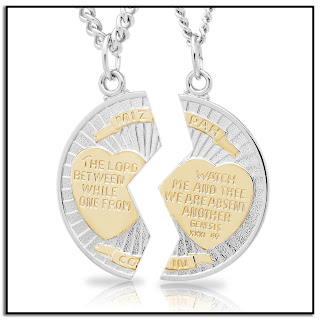 Originally a mound of stones set in place to serve as witness between Jacob and Laban, the place was called Galeed and also Mizpah, for he said, "May the Lord watch between you and me when we are out of each other's sight." Genesis 31:49 CSB

So this is what I realized.

First, I had no idea that these necklaces had any Biblical roots.

Second, I can say without a doubt that in no way, shape, or form, was there any type of Biblical foundation in wanting to give or have them.

Fourth, knowing the actual meaning of the word and the intent of the first declaration and usage of it, gives a much better perspective on the fact that this was an idol that had great value and has been determining my perception of my worth for a lot longer than it should have ever been given authority to do so.

Fifth, it proves that my deepest longing is still to feel valued, cherished, and like I belong. Maybe I'm not alone and this has struck a nerve.

I don't know about you, but I am sick and tired of believing ridiculous lies. Lies that I didn't even know were still running around rampantly in my heart and mind creating havoc. I mean seriously, at 43 I have still been determined to be labeled as somebody's BFF. I am 43. FORTY-THREE. If the madness hasn't stopped yet, and I don't acknowledge this reality now, I'll die this way for sure.

But there is hope for all of us that maybe didn't realize how much this has impacted us from a tender young age. And if we can see the truth behind it, maybe just maybe, we can save our daughters from this insanity. 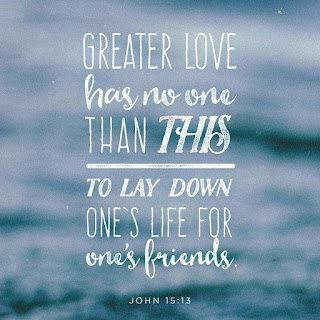 If Jesus considered Himself our friend, and willingly laid down His life for us, there isn't a necklace that can be given or a public declaration made by anyone else, that can trump that kind of friendship. And personally, I think it's time we placed our highest priority on developing this relationship that will influence and impact every other relationship we have for the better.

Honestly, I don't know if any of this means anything to anyone but me. And maybe the necklaces weren't your thing, but there is something else from your past that represents the same concept. But what we need to know is that while God designed us for relationships, He did not design us to idolize relationships or let earthly relationships determine our value. It will only ever be our relationship with Him that does that. And the last I checked, He still thinks that we are to die for.
at January 22, 2018