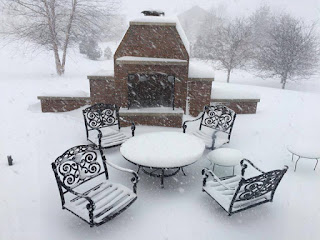 Chances are if you live in Erie, Pennsylvania you own either a snowblower, a shovel, or both. Why? Because you know the reality of what can happen in a short period of time. 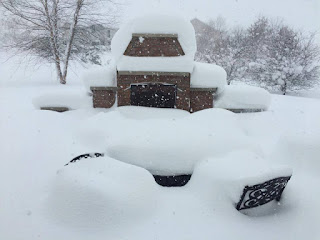 I can't remember the exact timeframe between start to finish in these picutres, but I believe it was about thirty hours. Lake effect snowstorms, when they come, leave little room for error: you're going to get dumped on.

Let's say you have four people living in four houses in a row.

How many people had their snow taken care of?

Trick question.....no one can say with absolute certainty.

House A owns the snowblower but didn't feel like getting it out and so they waited for the snow to melt.
House B didn't care because they had no where to go and were hunkering down in place.
House C didn't want to bother House A and assumed the blower was broken because House A didn't take care of their own snow.
And House D called their friends in House B and borrowed their shovel but only after the first six inches had fallen and never asked for it again after the other twenty-four inches fell.

Everyone had the ability and opportunity to take care of the snow. But only one person took any initiative to do something about it but felt defeated when the snow kept coming and so they just stopped.

Jesus apparently had a second job that I have failed to recognize. He was the ultimate weather man, predicting with 100% accuracy. 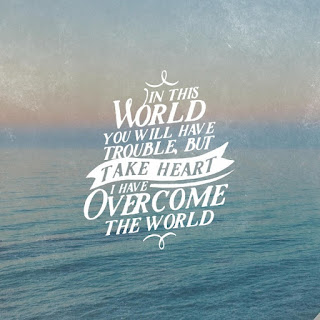 He told us, flat out, that we would encounter trouble. And not unlike preparing for a big snow storm where we can make sure the snowblower is gassed up, the shovel handle is strong and uncracked, and we have enough milk, bread, eggs, and toilet paper for a month, we can prepare for the trouble that is bound to come.

Yesterday after school my man child and I had a talk on the way home. While he attends Student Ministry large group and participates in a small group, he does little if any reading of his Bible outside of those two things. As he is getting ready for high school next year, I encouraged him not to keep waiting to add reading God's Word to his daily routine. The fact is, if he waits until something tragic or unexpected to happen, he is starting without a solid foundation built on what God has already taught and shown him. Plus, I told him, even if you don't feel like you hear God speaking to you, He promises that His Words will never fall flat, will always accomplish the purpose for which He sent them, and that the Holy Spirit will remind us of everything Jesus has said and taught us. Finally, I reminded him that having it in his heart will allow him to help others when the need arises.

But ultimately the choice is his. His dad and I can't force it because we don't want him to resent it. All we can do is encourage it and set an example.

However, I am now seeing that even though I do spend time in God's Word, I don't often think to pull the snowblower out or get the shovel ready when the snow starts to fall. I tend to focus more on what I'm seeing than covering it with the truth and promises of what God ultimately says is true. And if that's the case, how can I expect my 14 year old to think it's worth it if all he sees is me fretting after all the effort he's watched me put in? Ouch.

As believers we have the joy and privelage of telling others about how accepting Jesus into our lives has been a blessing. But if our thoughts, attitudes, and actions don't reflect that beyond our point of conversion, we've also got gap in our belief system. Frankly, I think it's time to narrow the gap.

Mark 9 tells a story of a father desperately seeking healing for his son. That father prays the boldest 6 words we can add to our daily prayers: I do believe; help my unbelief.

Three times now in the past week, I have been told about doing a truth table. The idea is to write a lie on one side of the page and on the other what the truth of God's Word says. Three times it's been on my mind and once on my 'to-do' list. Still not done. And then this morning, I realized something. I don't have to make a list all at once. I can actually trust God to reveal what's stealing my joy and then write a truth over it. Sure by the end of the year the list may be extensive, but I don't have to write the equivalent of a doctoral dissertation in one morning. (Yes, I am Type-A. Combine that with INFJ and Enneagram Type 2 and you've got a big ole' hot mess.)

I realize I've given us a lot to think about all at once. But as much as I've shared, it's all related and dependent upon each aspect. We have what we need, we need to be willing to use it, and when we realize it's not working as it should, we need to ask for help. Thankfully we have a good and gracious Father and a Savior that can empathize with our weaknesses.

My prayer is that something within these words has made each of us realize something about ourselves. And that in turn, we'll get out the snowblower, shovel, or phone to ask for help. We aren't meant to live buried alive under fifty-three inches of snow. Maybe it's time to clear it out.
at January 26, 2018